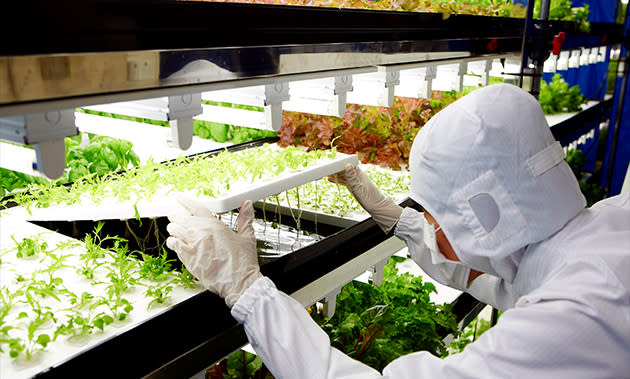 The name "Toshiba" conjures images of stacks of laptops piled high and maybe the occasional television, but the Japanese electronics giant is turning its attention to something just a little more humble: lettuce. Well, spinach too. And swiss chard. Quartz's Dan Frommer tells the tale of a Toshiba-owned clean room nestled in the industrial corners of Yokosuka where people clad in special suits dutifully plant seeds and plop them on tall racks under an array of fluorescent lights. The end result? Tasty veggies that you won't need to wash (though if you're a mild hypochondriac like your author, you'd probably give 'em a quick rinse anyway).

Toshiba isn't diving into the world of clean cuisine just because it wants to appease Japan's gourmands. No no -- it aims to produce some 3 million bags of greens a year to help firm up its position as an end-to-end healthcare company. It's actually pretty brilliant, if a bit paradoxical: Toshiba wants to sell those healthy, pristine greens and the technology (mostly centered around internal imaging for now) that'll help when something ails you. It's not the only Japanese megaconglomerate to dabble in a spot of indoor agriculture, either. Sony converted a closed semiconductor factory in Miyagi prefecture into an elaborate growing operation that churns out specially tweaked lettuce that's chock full of extra beta carotene, and Fujitsu -- a massive company that dabbles in some really obtuse stuff -- has a room in Wakamatsu churning out low-potassium lettuce for folks with chronic kidney disorders. Forget about hacking gadgets together, maybe the future is in hacking the very stuff that keeps us going.

In this article: farming, health, healthtech, japan, sterile, Toshiba, vegetables
All products recommended by Engadget are selected by our editorial team, independent of our parent company. Some of our stories include affiliate links. If you buy something through one of these links, we may earn an affiliate commission.