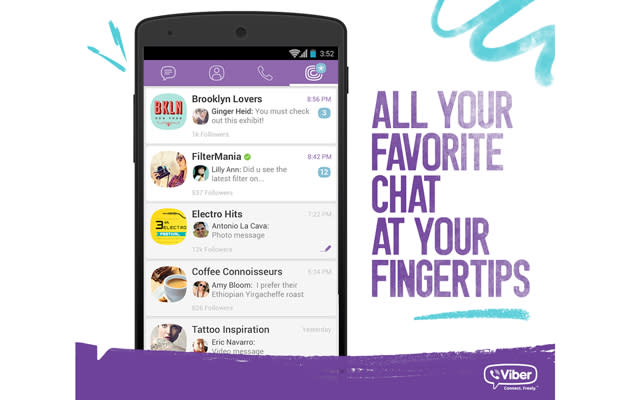 When we talk about online messaging, there's often a disconnect between mobile messaging services like WhatsApp and social media platforms like Twitter. Which is odd, because when you think about it, they're two halves of the same send-short-messages-to-each-other coin. It's a concept that's clearly troubled the folks over at Viber, to the point where it's adding something called Public Chats to its system. In essence, Public Chats are discussions between "personalities" that Viber's users can follow, in the same way you'd watch celebs shooting the breeze on Twitter. In order to kickstart the process, the company has hired a clutch of warm bodies that include Perez Hilton, Tyler Oakley and, erm, Copa90, a European football channel on YouTube. Unfortunately, there's no way to sneak behind the velvet rope and tell Tyler Oakley what you think of him, since all Viber is offering is a "fly-on-the-wall experience."

In this article: Perez Hilton, Viber
All products recommended by Engadget are selected by our editorial team, independent of our parent company. Some of our stories include affiliate links. If you buy something through one of these links, we may earn an affiliate commission.