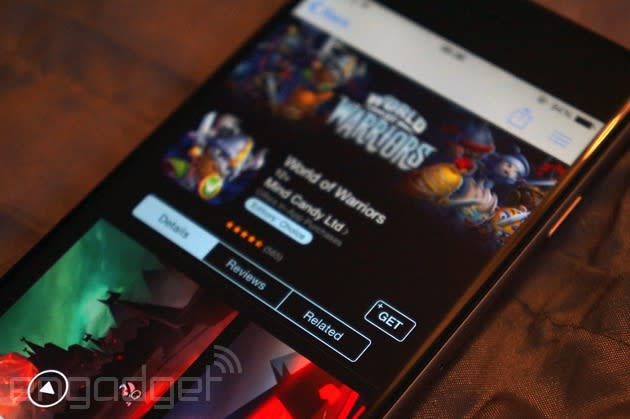 If you're searching on either the Mac or iOS App Stores today, you might notice a little change in the way Apple labels free apps. Before, even if such an app contained costly upgrades, it would carry the label 'Free.' However, following the company's latest App Store refresh, that description will now read 'Get.' But why? Well, it likely has something to do with the pressure Apple has been under from European regulators to better protect children (and parent's bank accounts) from the shady world of in-app purchases.

You know the drill: kid runs up $1,300 bill buying donut upgrades in The Simpsons app without a parent's permission. Apple's been in and out of court over this very issue, and ultimately agreed to refund unwitting customers fleeced by their children. After that, it applied warning labels to so-called free apps, further distancing itself from any potential recourse.

As part of recent changes, Apple has stripped pricing labels from all free apps in its app listings, even if they don't contain in-app purchases. If you navigate to a specific app's page, you'll then be presented with the new 'Get' button. Google took a similar approach earlier this year, after it decided to remove free labels from the Play Store and simply ask users if they'd like to "Install" an app.

Are these updates going to affect how you download apps? Probably not. Apple is simply becoming more transparent in an attempt to better educate users (parents) about what the millions of apps on its store really want from you. More developers are adopting "freemium" models, which allows them to monetize their work as new features are added. However, as South Park hilariously points out, many games are designed to only let you progress if you part with your money first.

In this article: app store, apple, apps, free, freemium, games, get, mobilepostcross
All products recommended by Engadget are selected by our editorial team, independent of our parent company. Some of our stories include affiliate links. If you buy something through one of these links, we may earn an affiliate commission.