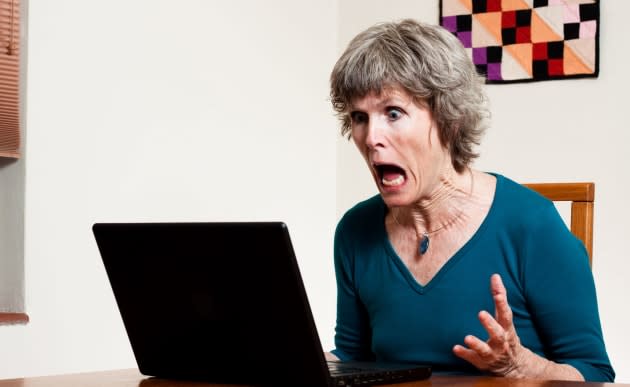 You've heard it happen one time or another: a senior who's not very tech-savvy clicked a dubious link online and paid a shady internet company a hefty sum to remove a virus that was never there. It's one of the oldest tricks in the book, and apparently, still one of the most effective: the Federal Trade Commission has just shut down two massive Florida-based telemarketing operations that reportedly scammed victims (mostly seniors) out of $120 million in total, duping them into buying fake anti-virus software and fake tech support. Both have been active since at least 2012, so they might sound familiar. The first one sold software called PC Cleaner, while the other did business under several names, including Boost Software Inc., OMG Tech Help and, hilariously enough, OMG Total Protection.

According to the FTC, their modus operandi starts when a hapless user downloads a free trial of the fake sofware, possibly through an ad on the internet. That fake program will of course diagnose the computer with dozens of equally fake malware and viruses, forcing the victims to buy the full version for $29 to $49. They will then be instructed to call a toll-free number to "activate" the software, giving the companies' telemarketers a way to scam them out of even bigger money. What these telemarketers do is ask users for remote access to their computers, where they launch programs most people don't use, like Windows Event Viewer. They tell the victims that these programs' presence means their computers have been deeply infiltrated, and the only way to save their machines is to purchase more software and lifetime tech support for as much as $500.

Feds got enough evidence to bring them down after undercover operatives asked the companies to look at perfectly clean computers, and the "tech reps" declared them infected, the Palm Beach Post reports. The enemy of all things scammy and scummy then raided the Delray Beach, Florida offices of OMG Tech Help and Vast Tech Support late last week, froze all the suspects' assets and filed cases against them. So, if you know anyone prone to clicking those shady "how to make your PC faster" links on the internet, send them over to FTC's report so they can read about this in detail

In this article: FederalTradeCommission, ftc, scam, TechSupport
All products recommended by Engadget are selected by our editorial team, independent of our parent company. Some of our stories include affiliate links. If you buy something through one of these links, we may earn an affiliate commission.