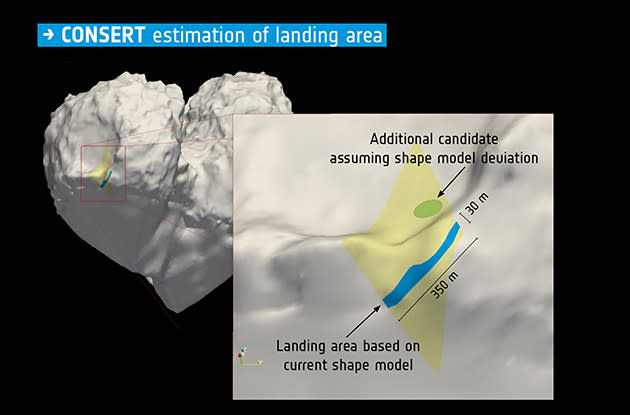 Philae's fate remains unknown as it snoozes underneath a cliff on comet Churyumov-Gerasimenko. But in the last few days, its ground crew has released a handful of updates that give us a better idea of what it's gone through since it left Rosetta for the comet, as well as of its current state. To start with, the team has released a 3D image of the comet's surface (seen after the break) from two miles above the ground, captured one hour before the intrepid lander was supposed touch down. Philae took the two photos of the original landing site two minutes apart using the Rosetta Lander Imaging System (ROLIS).

When it first reached the ground after that, the sensors on its feet picked up and recorded its landing sound. Apparently, that short, seemingly insignificant two-second recording, which you can listen to below, is enough for the scientists to be able to deduce that the comet's surface is probably covered in centimeters of dust, hiding a hardened layer of ice dust. As you might recall, though, the lander's harpoons failed to deploy, and it bounced twice before getting to its rather unfortunate resting spot, where it collected samples and data. Some of the samples it "sniffed" from the comet turned out to be organic molecules, which contain carbon: the basis of life on Earth.

The Philae team is still hard at work trying to find its exact location using Rosetta's cameras and its radio transmitter equipment called CONSERT. Thanks to the transmitter, ESA has narrowed down Philae's location to two small patches of land, making the search a lot easier. Once the agency finds the lander, the scientists will finally be able to fully analyze the data it beamed back. They'll also be able to figure out whether they can do anything to move it farther from the shadows, so it can harness more sunlight. In this article: jpl, philae, Rosetta, space
All products recommended by Engadget are selected by our editorial team, independent of our parent company. Some of our stories include affiliate links. If you buy something through one of these links, we may earn an affiliate commission.