Nokia's five-camera phone will include an in-screen fingerprint reader

A proper explanation of Google’s Android One program

LG's first Android One phone is a stripped-back G7 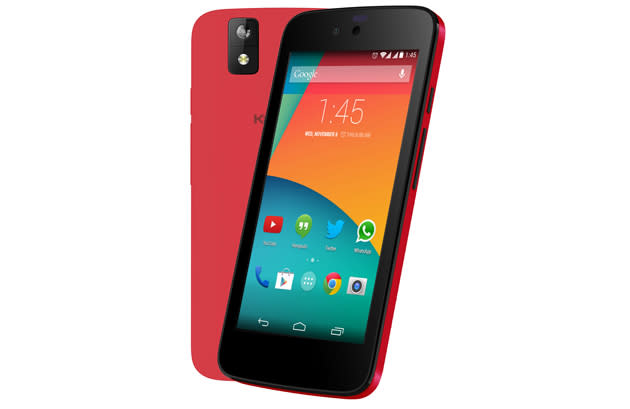 Karbonn isn't a company the vast majority of Brits will be familiar with. Since it started out five years ago, the Indian smartphone- and tablet-maker has grown to serve over 40 countries; and today, as part of Karbonn's ongoing expansion into Europe, the company has officially arrived in the UK. Bringing with it four handsets ranging in price from £70 to £130, Karbonn's brand message is simple: Bang for your buck. Due, in part, to reasonably priced phones like the Moto G and OnePlus One, consumers are becoming ever more conscious of the value of their devices. This is where Karbonn believes its strengths lie, and that it's going to win over potential customers with its range of affordable products. I do wonder, though, whether there's really enough room in the mobile space for Karbonn to make any kind of name for itself over here.

For now, Karbonn's devices are available only through Amazon in the UK. I'm told "advanced talks with high-street retailers" are underway, but for the remainder of this year at least, Amazon is the exclusive sales channel. Of the four devices launched today, the £70 Karbonn A5s is the runt of the litter, with a 4-inch, 800 x 480 display, dual-core 1.2Ghz processor, 512MB of RAM and 5-megapixel main camera. Stepping up to the £90 A19 gets you a 5-inch, 854 x 480 display, dual-core 1.3GHz processor and 8-megapixel shooter, while the £120 Karbonn S6 sports a 5-inch, 960 x 540 display, quad-core 1.3GHz processor, 1GB of RAM and an 8-megapixel rear camera.

Now, the S6 might have the best specs of the four-strong smartphone lineup, but the £130 Sparkle V (pictured above) is certainly Karbonn's highest-profile device. It's working with a 4.5-inch, 854 x 480 display, quad-core 1.3GHz Mediatek processor, 1 gig of RAM and a 5-megapixel primary shooter, but its most important credential is being part of Google's Android One program. It's the first Android One device in the UK, in fact, but that's not altogether surprising given such handsets are primarily intended for developing markets.

If you're not au fait with the whole Android One situation, it's basically a set of hardware standards developed by Google for making low-cost smartphones. Google set the requirements, and manufacturing partners like Karbonn build the actual devices. One of the main benefits of the program is guaranteed support for upcoming Android versions over the next two years, meaning the Sparkle V will be among the top of the pile when it comes to receiving Android Lollipop and beyond. For Black Friday tomorrow, Karbonn is also discounting the price of the Sparkle V to £99, so bear that in mind if you're interested.

The company hopes to bring its higher-spec, flagship handsets to the UK in due course, but for now wants to focus on promoting its more affordable phones while it builds brand recognition. This is where I see Karbonn having a tough road ahead. In its own words, Karbonn is going after the tech-savvy and price-conscious consumer, but in my opinion, they are the hardest to please. Part of the problem is none of the launch handsets are particularly exciting, with no 4G and miserly screen resolutions.

Then you've got stiff competition from other budget-friendly phones like the new Moto G, which is a significant improvement over the Sparkle V and only £20 more expensive. Furthermore, the majority of Brits still go to carriers to fulfill their need for a new phone, spreading the cost of the device over the duration of a mobile contract. Karbonn's situation reminds me of Huawei launching its low-price Honor brand in UK last month, as once the initial press attention dies down, I don't see how you build a solid brand by selling a few phones on Amazon. Karbonn is banking on being noticed, but without high-street retail partners next year, I can see the company name existing only alongside a few anonymous Amazon listings. The company is hopeful, however, telling me that it might be a new player, but this means there's only room to grow.

In this article: androidone, google, googleandroidone, karbonn, karbonnsparklev, mobilepostcross, sparklev, uk-feature
All products recommended by Engadget are selected by our editorial team, independent of our parent company. Some of our stories include affiliate links. If you buy something through one of these links, we may earn an affiliate commission.