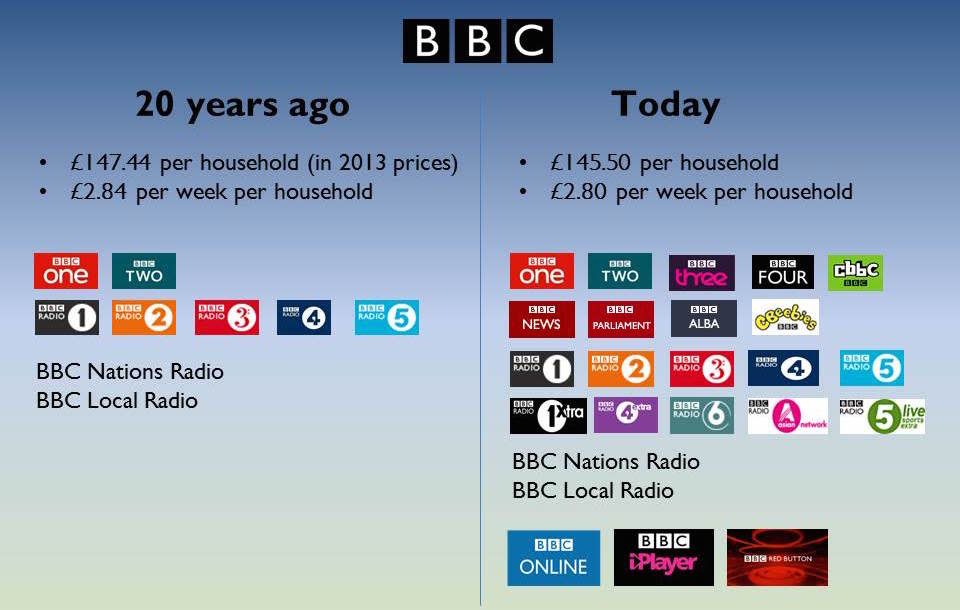 The BBC holds a privileged position in the UK broadcasting market. As the beneficiary of your TV license fees, the Beeb picked up £3.7 billion last year from Brits, helping it fund its TV, radio, and web services. Some -- notably its competitors -- argue this is unfair, and perhaps because of this, the broadcaster is going on the offensive (or, perhaps, defensive) by reiterating exactly what it offers for that money.

In a new image shared on its Twitter accounts (featured above), the BBC highlights just how much its content offering has expanded over the past two decades. In 1994, there were just two TV channels and five radio stations, but today you've got nine TV channels and 10 national radio stations to choose from, as well as BBC Online, iPlayer and a mix of interactive services via the red button.

The Beeb says its uses the annual £145.50 fee to invest in "the programmes and services the public most wants" and maximise revenues from programmes it licenses commercially to broadcasters around the world. That means things like Premier League rights on Match of the Day, getting Benedict Cumberbatch and Martin Freeman to do another series of Sherlock, Cbeebies and The Great British Bake Off. Earlier today, it announced that it had trimmed £1.1 billion off its annual spending following a "concerted savings drive," which it says will help it focus more on the things that matter to fee payers the most: programmes and services. Major spending cuts won't save it from some members of parliament, though. It's also come under pressure from politicians, who are reportedly calling for the license fee to be scrapped in favour of a voluntary subscription service. It comes ahead of the next BBC Charter review, where the corporation will negotiate with the government for the renewal of its Royal Charter in 2016.

While more than 90 percent of the BBC's spending is now on content, it has been criticised in the past for high executive bonuses and overpaying its top stars. The latest round of savings show that it can meet its goals without asking for more money -- in fact it thinks it can save a further £400 million by 2016/17. Whether that's enough to tide over MPs and license fee abolitionists remains to be seen.

In this article: bbc, hdpostcross, license fee, radio, tv, uk-feature
All products recommended by Engadget are selected by our editorial team, independent of our parent company. Some of our stories include affiliate links. If you buy something through one of these links, we may earn an affiliate commission.