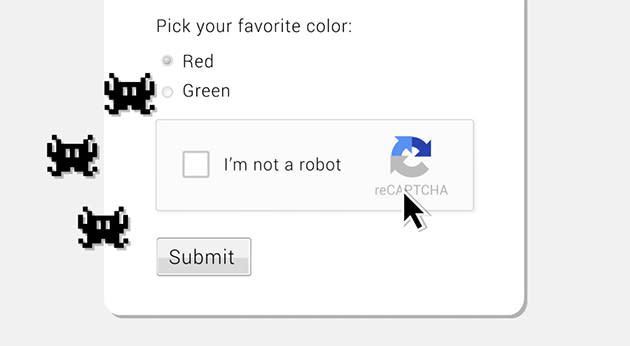 There's something just a little insulting about having to prove your humanity to some website by pecking out some distorted words, but Google's rolling out a new, less tedious way for web developers to tell if you've got blood or oil pumping through your veins. All you'll have to do is tick a box on a desktop site or match related images on your phone et voila -- you're in. Most of the time, anyway.

This new "No CAPTCHA reCAPTCHA" (try saying that three times fast) judges you instantaneously with a "risk analysis engine" that considers miscellaneous bits like your IP address and the movements of your mouse cursor to see if you're actually made of flesh and blood. In the event that you don't pass muster the first time 'round, you'll have to sit through a more traditional CAPTCHA complete with those all-too-familiar screwy words and numbers. Fair enough, we guess. Still, it's just a little sad to see the old school reCAPTCHAs slowly fading into the background -- they were originally developed not just to help webmasters combat fraud, but also to transcribe books and street addresses at the same time. That's why there were always two words to type: one was a control to prove you weren't full of it, while the other was the thing that actually needed deciphering.

It's all awfully clever in theory, but the move basically concedes that reCAPTCHA wasn't always that effective at keeping bots and trolls at bay. A few years back, we caught a glimpse at just how ineffective it could be when a sizable crew from 4chan stacked the deck in Time Magazine's Person of the Year award contest in founder Chris "moot" Poole's favor (they called out a delicious pastry while they were at it). Some decried the stunt as a hack, but that's not strictly speaking true -- that ballot box stuffing worked with reCAPTCHA the way it was intended. Those sort of digital native shenanigans might soon be a thing of the past, but hey -- at least the rest of us can get where we're going in relative peace.

In this article: bots, captcha, google, recaptcha, security, spam, web
All products recommended by Engadget are selected by our editorial team, independent of our parent company. Some of our stories include affiliate links. If you buy something through one of these links, we may earn an affiliate commission.