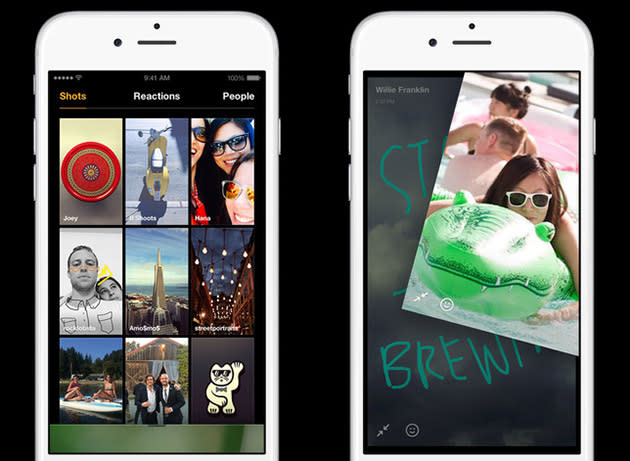 Notice anything new with Slingshot recently? Well, if you haven't used it in awhile, Facebook's ephemeral photo app has gotten an overhaul. The outfit says that refining isn't about what you add to something, but what you remove. In this update's case, that's seemingly quite a bit. Instead of the one-to-one photo-messaging tool it launched as, now Slingshot is a single-function app that's aping perhaps Snapchat's most social feature, Stories. Pictures and videos you share now go into a preview grid (above left) that gives a peek at all your friends' updates simultaneously -- instead of Stories' person-by-person list. Sending a photo or video clip is much more streamlined, too, with it only taking two taps to go from capture to upload. What hasn't changed is that your captures still only last 24 hours. Want to share your daily pics outside of Slingshot's user-base? You can export your content directly to Facebook, Instagram and Twitter now as well.

Update: In the previous version of Slingshot, media lasted for up to 30 days. With the latest update, your shots and reactions only last 24 hours or until someone swipes past them.

A Facebook account is required to log in now too; it isn't just an option for finding friends. And, for the moment, you need to follow friends to send private responses to their uploads; original, one-to-one messages aren't available as far as we can tell. If you want to get really crazy, you can even follow content creators you don't know. Slingshot doesn't have the ability to send money to friends (yet), but if the design trend continues that probably isn't far off. The questions that arrive with this update are if anyone is actually using Slingshot, and how long before it goes the way of Facebook's other standalone apps?

In this article: facebook, messaging, mobile, mobilepostcross, photo, slingshot, snapchat
All products recommended by Engadget are selected by our editorial team, independent of our parent company. Some of our stories include affiliate links. If you buy something through one of these links, we may earn an affiliate commission.