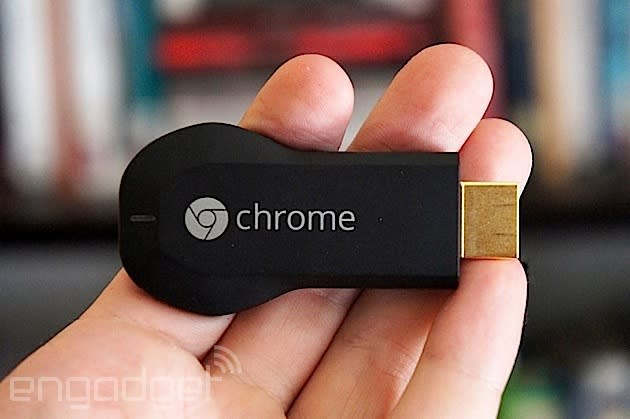 With the number of content providers that keep coming on board with Chromecast, the next big step for Google is making the device a bit easier to use. Case in point: Today marks the launch of ultrasonic pairing -- otherwise known as "Guest mode." All you need to do is enable Google's streaming stick to connect to a nearby device and voila: Now anyone can cast to your TV from their Android, no WiFi password needed. For now, it's exclusive to Google's own OS, but there's a reason for that. Chromecast product manager Jagjit Chawla says that with iOS, you can't scan for a list of nearby WiFi access points because there isn't an API that'd allow it. Thus, Guest mode on Apple's mobile software isn't going to happen right away. "Either we can solve these tech problems, or, we can release it on Android first, gather user feedback, improve our back-end and find solutions," he said, with the goal of reaching iOS feature parity sometime later.

Guest mode in and of itself is part of a bigger push to make the device easier to use, in addition to getting more cast-enabled apps on board. "If you have more content and it's easier to get to it to the TV, then the whole ecosystem grows," Chawla says. For example, let's say you just bought a movie from Google Play and want to watch it at a friend's house. Before Guest mode, that'd mean the often cumbersome process of getting your pal's WiFi password and plugging it into your phone, or, having your friend log into your phone with their Google account. Neither are particularly ideal and are a bit of a roadblock to just sitting back and enjoying Gravity.

In the early days, just getting Chromecast out the door and into homes was the big focus. This year saw the device's SDK finalized and it getting baked into Google Play Services -- essentially becoming a finished product. For 2015, Chawla says the idea is to expand on ways that Chromecast becomes even more handy. "We look at how we can make the living room more effective and features that make Cast mode easier to use," he says. "If you look at the evolution of the product, like Backdrops, it isn't a core function, but it makes your TV more useful to you." Just how much further Google takes that and what other additions are in the hopper are anyone's guess at this point.

In this article: android, Chromecast, google, GuestMode, hd, hdpostcross, IOS, jagjitchawla, mobile, mobilepostcross, UltraSonic
All products recommended by Engadget are selected by our editorial team, independent of our parent company. Some of our stories include affiliate links. If you buy something through one of these links, we may earn an affiliate commission.