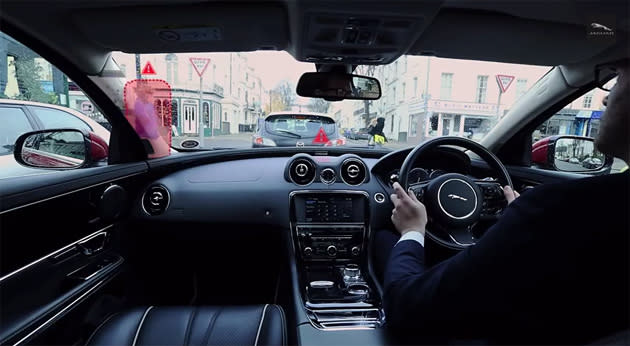 It's hard to spot every possible road hazard. Mirrors and cameras will show what's behind you, but your car's roof pillars can still hide careless pedestrians and aggressive drivers. They won't be issues if Jaguar's 360-degree Virtual Urban Windscreen comes to fruition. The update to the company's windshield project uses cameras to create "transparent" pillars which highlight threats you can't see, giving you an extra moment to take evasive action. It promises distraction-free navigation, too -- the screen generates a ghost car that shows you where to turn, as if you're simply following a friend. The technology is still in mid-development and probably won't be as sleek as Jaguar's concept video suggests, but it hints at a future where you're rarely caught off-guard while driving.

In this article: 360virtualurbandwindscreen, car, driving, Heads-upDisplay, headsupdisplay, hud, jaguar, jaguarlandrover, transportation, video, windscreen, windshield
All products recommended by Engadget are selected by our editorial team, independent of our parent company. Some of our stories include affiliate links. If you buy something through one of these links, we may earn an affiliate commission.