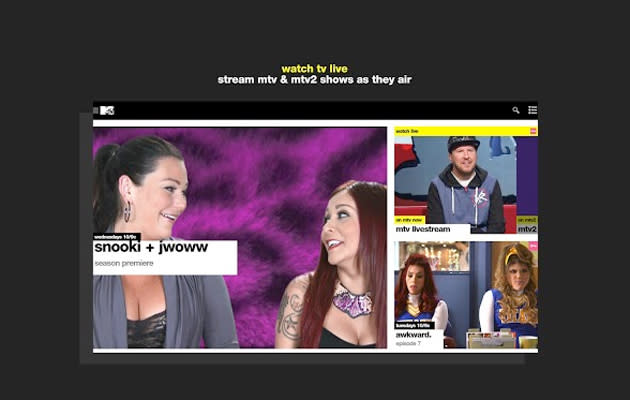 You've been able to catch up with episodes of Jersey Shore through MTV's iOS and Android apps for around a year. But, if you wanted to gasp along with the action as it was broadcast, you'd have to make an appointment to take over the family TV. Thankfully, the reality channel has updated apps on both platforms to bring a live feed of both MTV and MTV2 to your device (assuming you have a participating pay-TV provider to log in with). That said, we can't imagine anyone persisting with the feature for too long -- those ad-breaks are a lot shorter when you're catching up.

In this article: Android, apple, google, hdpostcross, iOS, Jersey Shore, Live, mobilepostcross, MTV, Streaming, TvEverywhere
All products recommended by Engadget are selected by our editorial team, independent of our parent company. Some of our stories include affiliate links. If you buy something through one of these links, we may earn an affiliate commission.