France wants to make its own cheap electric car 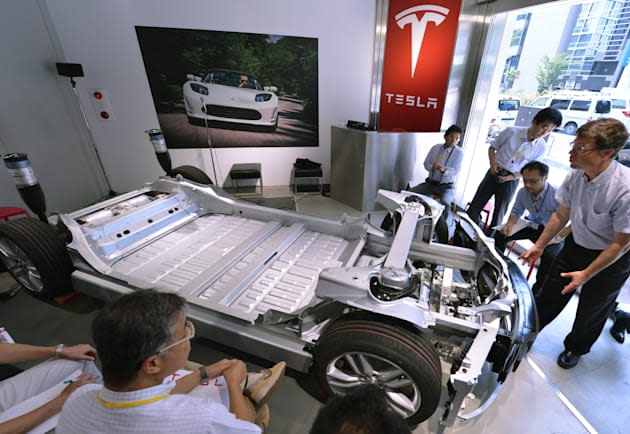 Tesla's automated battery swap stations that boost cars with a fully charged power pack instead of a slow charge are finally becoming a reality. First shown off over a year ago, the company announced today that it's ready to start a pilot program for invited Model S owners along the San Francisco to LA route, at a facility across the street from its Supercharger station in Harris Ranch, CA. Right now Tesla says the whole process can be done in under three minutes, but with changes to the vehicle design, it says cars could be ready to go in less than a minute (a video of the process being done in 90 seconds is embedded after the break). While charging the company's flagship EV on its Supercharger network is free, for now the by-appointment-only swaps are promised to cost "slightly less than a tank of gas." When they were introduced, the suggestion was a $60 - $80 price range, but even with the price of gas falling, that may have changed too. The point of the pilot program? To figure out if the demand for battery swaps that cost money vs free charging is high enough for the idea (and the $500,000 facilities that make it work) to make sense.

In this article: batteryswap, elonmusk, models, tesla
All products recommended by Engadget are selected by our editorial team, independent of our parent company. Some of our stories include affiliate links. If you buy something through one of these links, we may earn an affiliate commission.