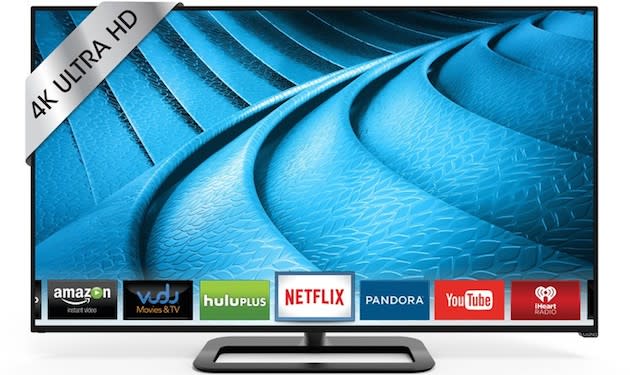 Vizio may not be jumping on the curved TV bandwagon anytime soon, but it does have several TVs on the shelf chasing the Ultra HD/4K trend. Those P-Series displays will get some new tweaks soon, including an Amazon app with support for 4K video from its subscription Prime video service or VOD. Also coming soon are apps for UltraFlix and Toon Goggles, and both have 4K content ready for streaming. Netflix already streams 4K to Vizio's TVs, and other apps available include Plex and Spotify. A better upgrade is the one noted by our friend Robert Heron: When the new firmware rolls out, it will fix a bug that overly sharpened the picture on still photos, Blu-ray movies and even 4K video, while also improving the LED backlighting and motion processing. Owners can look out for the v1.1.13 update in the "coming days," which should go over better than another sweater or pair of socks.

In this article: 4K, amazon, amazon prime instant video, hdpostcross, p-series, UltraHD, vizio
All products recommended by Engadget are selected by our editorial team, independent of our parent company. Some of our stories include affiliate links. If you buy something through one of these links, we may earn an affiliate commission.