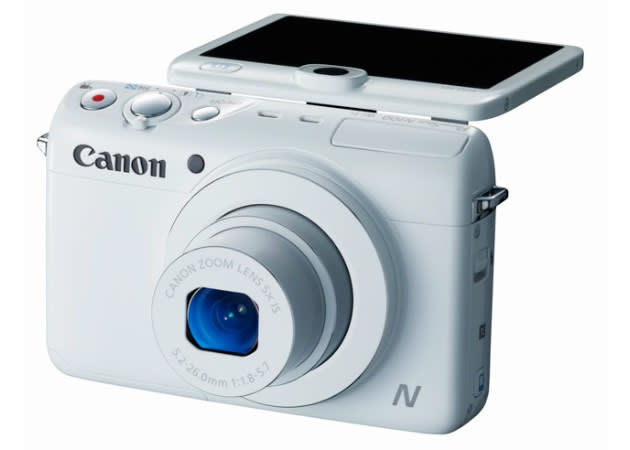 We weren't quite sure what to think of Canon's PowerShot N, an unusual-looking point-and-shoot with a large touchscreen and a square design that launched at last year's CES. That model didn't follow the traditional pocket camera form factor, and while we were happy to give Canon some props for innovation, we weren't convinced the N would be a success. And now, well-received or not, the non-traditional cam is back. This year, it's the PowerShot N100 -- and Canon even had the chutzpah to price this thing higher than its 2013 equivalent, at $350. That sum will net you a 12-megapixel CMOS sensor, Canon's latest DIGIC 6 processor, a 5x f/1.8-5.7 (24-120mm) optically stabilized zoom lens, and a 3-inch, 922k-dot touchscreen that flips up 90 degrees. There's WiFi, like last year's model, along with NFC, so you can tap the camera to a compatible Android smartphone for instant image and video transfers.

But the spec Canon is pushing most with the N100 is a secondary rear-facing camera. We've seen plenty of rear-facing cams on smartphones and even a few tablets, but this appears to be the first time a manufacturer is including one on a dedicated point-and-shoot. The intention here is that photographers will use this second camera to capture their own expression in still or video form alongside content coming in through the primary lens. We first experienced this concept with LG's Optimus G Pro, and while it's a bit gimmicky, we can see Dual Capture resonating well with Canon's target demographic. There's also a Hybrid Auto mode that snaps four seconds of video before each still photo, a Creative Shot mode enabling a handful of assistive options and a standard video mode for capturing clips at up to 1080p. The PowerShot N100, available in black and white, will run you $350 when it ships in May. 6
In this article: camera, cameras, canon, canon n100, ces2014, n100, point-and-shoot, powershot, powershot N100
All products recommended by Engadget are selected by our editorial team, independent of our parent company. Some of our stories include affiliate links. If you buy something through one of these links, we may earn an affiliate commission.