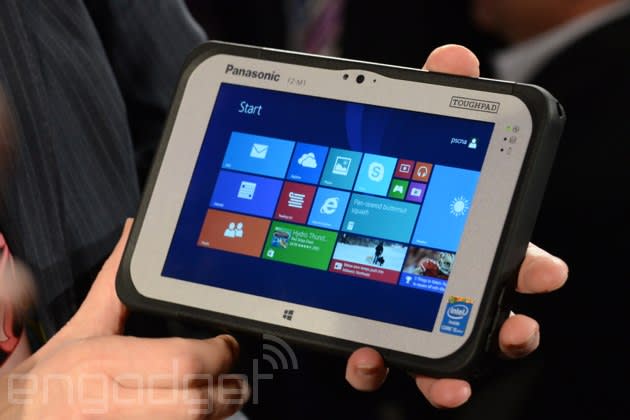 At its CES press conference today, Panasonic unveiled a new addition to its Toughpad line of rugged tablets. According to the company's North American President, Rance Poehler, the 7-inch FZ-M1 is the thinnest rugged tablet of its kind, and it's certainly a more portable solution than the 20-inch, 4K Toughpad launched last year. (It's unlikely to pack just as many pixels on its smaller display, though.)

The tablet's edges are rounded, and a rubber lining is on hand to protect ports and connections. Though Panasonic touts this guy as the thinnest rugged device in its size group, that's not saying much; it's no Nexus 7 or iPad mini, basically. The M1's bezel is a glossy white, as is the Toughpad way, but its build is high-quality and it shows. There aren't many specs to share at this time, but let's move on to the internals.

Unsurprisingly, the 7-incher is packing some serious specs under the hood; it runs Windows 8.1 Pro (64-bit) on a fanless Intel Core i5 vPro processor, and naturally it meets the requirements for shock-, drop-, and temperature-resistance. Specifically, it boasts a MIL-STD-810G rating for rough and tumble, in addition to an IP65 certification for dust and water resistance. The shell might be impressive, but the screen is no slouch either -- the multi-touch display even boasts "glove touch technology," hopefully letting you keep those mitts (or welding gloves) on. It's also daylight-readable, and the matte finish does look like it could hold its on against some sun overhead.

When it comes to connectivity, the slate packs a USB 3.0 port and microSDXC slot, with options for barcode, MSR, SmartCard, Serial and LAN features. Panasonic's hardened tab also sports WiFi, dedicated GPS, NFC, UHF RFID, Bluetooth 4.0 and optional, integrated LTE connectivity. Sure, it's got an air-tight case, but the hardware still manages to handle hot swaps of its batteries. Unfortunately, that's about all we have to share at this point -- stay tuned for more info. Alexis Santos and Zach Honig contributed to this report.

In this article: CES, ces2014, panasonic, panasonic fz-m1, panasonic toughpad, panasonic toughpad fz-m1
All products recommended by Engadget are selected by our editorial team, independent of our parent company. Some of our stories include affiliate links. If you buy something through one of these links, we may earn an affiliate commission.