Not stopping with its new productivity-centered Galaxy Note Pro, Samsung has three more tablets to launch this year. Say hello to the Galaxy Tab Pro, in 12.2-, 10.1- and 8.4-inch screen sizes. Curiously, the resolution is actually uniform across the three differently sized tablets: 2,560 x 1,600, with LTE and HSPA radios all baked in for good measure. If you've seen a Samsung Galaxy Tab over the last few years, then you'll find the new range very familiar. If you liked those relatively clean lines and grippable bezels, then you're going to like Samsung's 2014. On the back, each tablet also borrows the leathery finish found on both the Note 3 and the most recent Note 10.1 iteration, which means it's not difficult to grip and felt much better than just a glossy plastic surface.

We've got shots of the whole family below, while if you like your tablets in moving image, there's a quick tour after the break. The biggest Galaxy Tab Pro will come with 3GB of built-in RAM, versus just 2GB in its smaller siblings, but otherwise the devices share the spec sheet. From cameras (8MP on the rear, 2MP up front) to the launch OS (Android KitKat, thank you), troubled tablet buyers really just have to plump for their favorite size. It's also worth mentioning that the 8-inch Tab Pro is vertically oriented, which makes sense -- it felt more comfortable holding it that way. This smaller screen, with the same resolution as the others, meant it was pin sharp and helped make it our early favorite of the trio.

The whole range is less than 8mm thick, which (again) is just like the 2014 edition Note 10.1 -- in fact, the 10.1-inch middle model is all but identical, aside from the lack of an S Pen and a drop down to two gigs of RAM. The Galaxy Tab Pro (12.2), however, seems like a harder sell. It's just big. It's not thick or unattractive, just big. However, it's only this Galaxy Tab Pro that comes with the same $700 bounty of built-in software and services found on the Galaxy Note Pro. We've added the full breakdown below, but it includes 50GB of Dropbox storage as well as Bloomberg Businessweek and NY Times subscriptions. All three tablets are set to launch later this quarter. 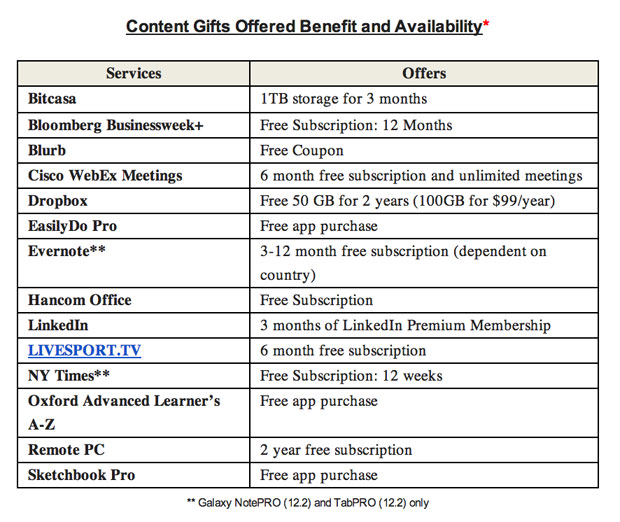 In this article: ces, ces2014, Galaxy tab pro 10.1, galaxytab, galaxytabpro, galaxytabpro12.1, galaxytabpro8.4, hands-on, mobilepostcross, samsung, video
All products recommended by Engadget are selected by our editorial team, independent of our parent company. Some of our stories include affiliate links. If you buy something through one of these links, we may earn an affiliate commission.