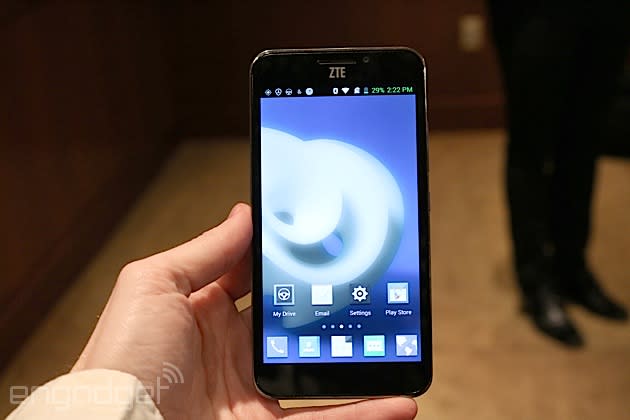 ZTE brought a handful of products to show off at CES 2014, and they range from your run-of-the-mill flagship to projectors and smartwatches. Leading the pack is the Grand S II, an obvious follow-up to the Grand S announced at last year's January extravaganza. As the company announced this morning, the sequel features a 5.5-inch 1080p display, Snapdragon 800, 13MP rear camera and a respectable 3,000mAh battery. ZTE hasn't made any official announcements on when and where it plans to launch the device, but we're not holding our breath for US availability.

We were able to spend a few minutes with the new Grand S, and it's just fast as we'd come to expect from a Snapdragon 800 device; it features ZTE's custom skin on Android 4.3, which certainly takes a little getting used to. But one thing that really aroused our curiosity is its voice control capabilities, which are completely customizable and can recognize multiple voices. Just like the Moto X, you can completely unlock the screen verbally; no training is necessary, and ZTE tells us that it's even possible to add your own trigger phrases. The phone was able to recognize voices and process commands with only a short delay, and we imagine this will continue to improve as the company works on the finishing touches.

The device has a removable plastic back which looks a lot like brushed metal, and it looks smooth and classy. However, while ZTE couldn't confirm what kind of plastic it's using, we weren't terribly convinced that it'll stand the test of time. Just adding a little bit of pressure on the back resulted in a hefty amount of creaking, and while a little bit of give can actually be beneficial if you're hard on the phone, this offered generous amounts of it. We'll have a hands-on video from the show floor tomorrow, but enjoy our image gallery in the meantime.

34
In this article: grand s 2, grand s ii, grandsii, hands-on, touchless controls, voice recognition, zte
All products recommended by Engadget are selected by our editorial team, independent of our parent company. Some of our stories include affiliate links. If you buy something through one of these links, we may earn an affiliate commission.