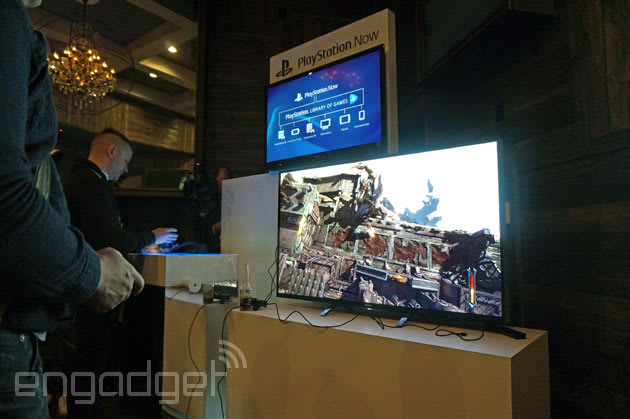 You'll excuse us if we didn't expect PlayStation Now to work so well. It's a game-streaming service, and the history of game-streaming services is littered with dead bodies. When Sony spent an unbelievable $380 million on Gaikai, it seemed impossible that the service could ever live up to that incredible sum. While PlayStation Now may not live up to that massive payout, it does, in fact, work. And it works really well.

We got our hands on PlayStation Now today at a CES 2014 PlayStation event, where we tried God of War: Ascension on a Bravia TV (without a PS3) and The Last of Us on a Vita. Both games played like there was a local PlayStation 3 (including the incredibly long initial load for The Last of Us) and ran without a hitch. There was zero perceptible lag in our (admittedly brief) playtime, and we suspect that the internet Sony's using is of the very strong variety.

The service is set to launch later this month in closed beta, and later this summer on PlayStation 3, PlayStation 4 and Vita. As for mobile devices and Bravia support, that's expected by year's end. Given the relative earliness of PlayStation Now, the UI we saw was non-final (and looked like little more than placeholder art). The same goes for the list of supported titles via streaming -- the service will launch with a variety of "marquee PS3 games," though nothing's set in stone thus far. We expect the God of Wars and Gran Turismos of the world will be there on day one, but only time will tell.

Beyond the subscription to access full games, there'll be rental and demo options available through PlayStation Now. But again, none of this is final, and only one facet of PlayStation Now was available for testing here at CES. What we did see was impressive and fulfilled the promises Sony's made when it comes to game streaming, but there's a long way to go before PlayStation Now launches this summer.

Edgar Alvarez and Mat Smith contributed to this report.
In this article: bravia, ces2014, hands-on, hdpostcross, playstation3, playstation4, playstationnow, ps3, ps4, psvita, sony, video, vita
All products recommended by Engadget are selected by our editorial team, independent of our parent company. Some of our stories include affiliate links. If you buy something through one of these links, we may earn an affiliate commission.