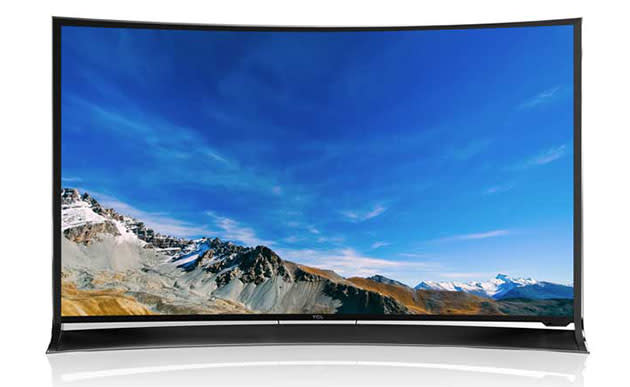 Here at CES 2014, it's all 4K, all the time. Budget TV maker TCL has just revealed a curved, 55-inch 4K model of its own, claiming the arc angle is the same as your retina for a "truer picture that minimizes eye strain." We're not quite sure we follow that logic, but if flat is more your thing, the Chinese company is also flaunting an "ultra-thin" 55-inch OLED model, claiming it has a wider color gamut, better contrast and a faster refresh rate. That model, however, seems to be standard HDTV resolution. The company will also be showing an 85-inch HDTV with a Touch Pen for artists, a virtual-holographic 3D TV using zSpace tech and a 110 inch HD model that uses polarizers to allow simultaneous program viewing. There's no mention of prices or availability, but we're hoping for something less shocking than we've seen so far -- after all, TCL markets a 4k, 50-inch TV for under a grand.

In this article: 4K, ces2014, CurvedDisplay, holographic, OLED, TCL, UltraHD, zSpace
All products recommended by Engadget are selected by our editorial team, independent of our parent company. Some of our stories include affiliate links. If you buy something through one of these links, we may earn an affiliate commission.