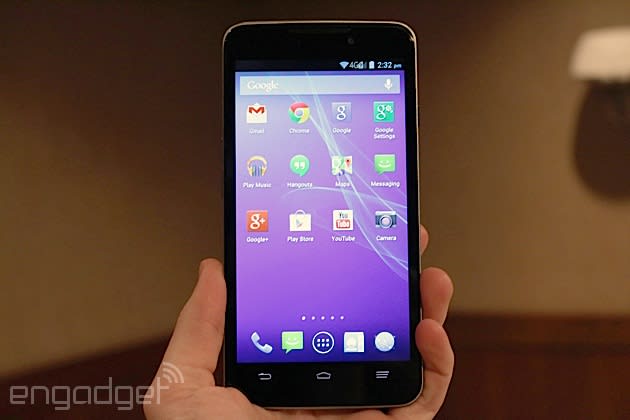 Regardless of what feelings you may have towards the term "phablet," as soon as it officially becomes part of the name of a device, you know that word isn't going away any time soon. It's just double the trouble when the phone in question is actually called the Iconic Phablet. As the name implies, the Phablet is a large smartphone with a 5.7-inch 720p display, but it doesn't seem that much different from the Grand S II, which is just two tenths of an inch bigger. It actually feels pretty comfortable to hold, despite the fact that it's slightly larger, taller and thicker, but the lackluster display is a bit of a disappointment unless it's marketed at a low price point.

The feature we found most interesting on the phone was ZTE's version of Multi-Window, which the company threw into its half-stock, half-skinned version of Android 4.3 Jelly Bean. We've seen this feature in the Galaxy Note series for a long time now, but ZTE's option doesn't require a developer kit, which means any third-party or native app will work just fine no matter what. The Phablet has a three-segmented back, with a standard grey plastic matte build on top and bottom and solid sheet of plastic sandwiched in between. You'll get an 8MP rear camera with LED flash and a 1MP camera on the front, as well as a 3,200mAh battery, dual-core Qualcomm Snapdragon chipset, 1GB RAM, Bluetooth 4.0+LE and a groan-worthy 8GB internal storage. Finally, the back features a trio of wireless charging pins that will work as long as you get the supported case that clips onto the phone (sold separately, of course).

Curiously, ZTE tells us that the Iconic Phablet will offer a radio with LTE, CDMA and EVDO support, while GSM/EDGE and HSPA+ are nowhere to be found. We're told that there's a very good chance that this device will eventually be sold in the US, which means that it'll land on a CDMA carrier -- that is, unless ZTE comes out with a special version that makes it compatible with AT&T and T-Mobile. As with the company's other CES products, availability and pricing aren't known just set. We got a few minutes with the device and have uploaded it into our image gallery, and we hope to have a video of the device up soon.

14
In this article: android, hands-on, iconic, iconic phablet, mobilepostcross, phablet, zte
All products recommended by Engadget are selected by our editorial team, independent of our parent company. Some of our stories include affiliate links. If you buy something through one of these links, we may earn an affiliate commission.