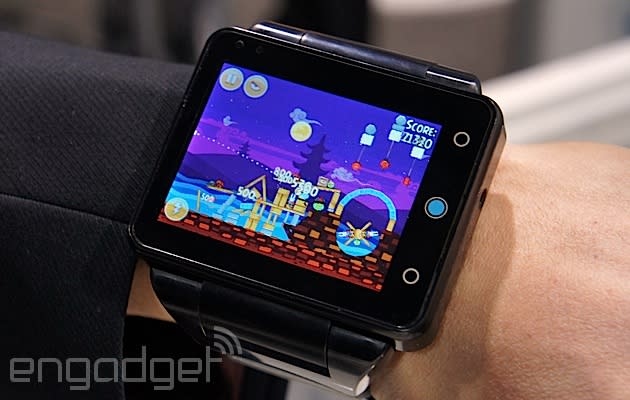 When designing a smartwatch, the general trend is to start with a basic timepiece and add features until physics or budgets get in the way. That's not the approach taken by 19-year-old Canadian Simon Tian when he developed the Pine by Neptune. Instead, he took to Kickstarter with the idea of just shrinking a last-generation smartphone down to watch-size proportions. The result isn't really a watch in any sense of the word, but considering that the Pine raised eight times its goal on Kickstarter, there's clearly a desire for this sort of hardware. We got to spend some time with it at CES and want to share some impressions with you. Even with the pictures, it's hard to get a sense of the scale of this thing. Imagine something the size of a deck of cards that's strapped along your wrist and you're almost there. The three Android navigation buttons run down the right side of the 2.4-inch, 320 x 240 TFT screen. Powering this thing is a 1.2GHz Snapdragon S4 paired with 512MB RAM and when using it, it's certainly swift enough to play Angry Birds without any stutter or lag. Considering that it is a smartphone that's been shrunk in the wash, you'll also find a micro-SIM card slot, speakerphone and forward- and rear-facing cameras. The VGA forward-facer is fine for video calls, but to use the primary lens, you'll actually have to unclip the device from the wrist clip to use it.

Because of the size of the display, it's entirely possible to use a full-size software keyboard, meaning that it's feasible, if not comfortable, to use this for email and texting. In fact, the phrase "feasible, if not comfortable" probably sums this device up in its entirety. While we're sure there are plenty of people who will overlook its size in favor of having full smartphone functionality attached to their wrist, we can't imagine this selling beyond its niche. Still, if you remain determined to snaffle one, the 16GB edition will cost $335 and the 32GB edition will set you back $395 when they launch in March.

In this article: CES 2014, ces2014, hands-on, mobilepostcross, Neptune, Neptune Pine, Pine, wearables
All products recommended by Engadget are selected by our editorial team, independent of our parent company. Some of our stories include affiliate links. If you buy something through one of these links, we may earn an affiliate commission.