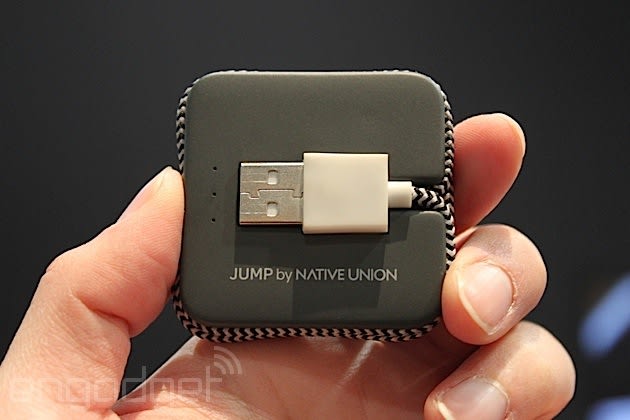 It only took a little over 24 hours for Native Union's Jump, a charging cable with a built-in battery pack for juicing up on the go, to reach its funding on Kickstarter. Still, the company hasn't abandoned its booth here at CES to go out and celebrate, so we dropped in and laid some paws on the accessory. In case you need a recap, Jump consists of a central hub which contains an 800mAh battery, one braided cable with a Lightning adapter (or micro-USB) at the end, and another with a USB plug.

The hardware is lightweight, easily pocketable and feels quite sturdy. Even the cords themselves feel like they can withstand a significant amount of wear and tear. While at first sight, the cables might appear as if they retract, they simply wrap around the central box and fit into small grooves. stretched from end to end, the contraption measures up at roughly 18 inches in length. On the face of the gadget sit a trio of lights that indicate the built-in battery level when a button on its rear is pressed.

Not only does the device feel solid, but it's also quite smart. When plugged in, it'll make sure the gear you've connected will be charged up before topping off its own battery. While Jump will be available for $50 when it launches in May, you can snag it now through its already-successful Kickstarter campaign for $40.

11
In this article: battery, BatteryPack, cable, ces, ces2014, CrowdFunding, hands-on, jump, Kicksarter, lightning, micro-USB, NativeUnion, usb
All products recommended by Engadget are selected by our editorial team, independent of our parent company. Some of our stories include affiliate links. If you buy something through one of these links, we may earn an affiliate commission.