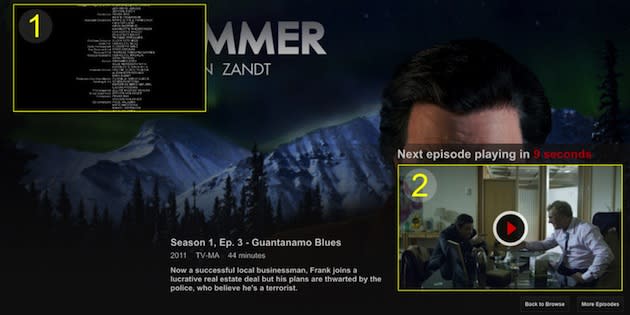 Netflix has been rolling out a 'post-play' experience (shown above) on various platforms since late 2012, but not everyone is a fan of how it jumps to a new episode automatically. That's not a problem anymore, since TechHive points out that now there's a toggle in your Netflix account settings (under playback settings) that keeps it from playing the next episode automatically. By default the feature is on, although as Netflix explains, it still requires a prompt of some kind to keep going after a couple of episodes have played. The post-play UI remains intact no matter what you choose, so watching the credits for every last best boy, grip and "no animals were harmed in the making of" will still require jumping on the remote to zoom back in. Of course, if your main concern is of House of Cards moving on an episode or two after you've dozed off, then this will fix it. Like other settings it's locked to individual profiles, so turning it off for the kids can keep them from turning out like the rest of us -- far too lazy to bother clicking a button to advance. In this article: hdpostcross, netflix, PostPlay
All products recommended by Engadget are selected by our editorial team, independent of our parent company. Some of our stories include affiliate links. If you buy something through one of these links, we may earn an affiliate commission.