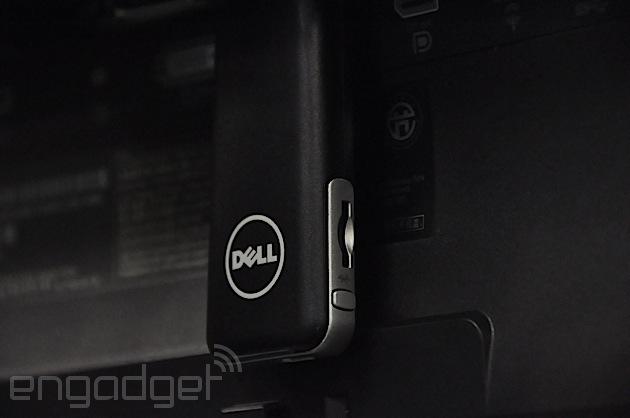 Dell's betting that a bunch of businesspeople want to be able to carry their work computer around in their pocket. Not literally, of course, but with the release of the company's $130 dollar Wyse Cloud Connect dongle (formerly known as Project Ophelia), you can do just that. It connects to any TV or display with an HDMI or MHL port, and hooks up to mice and keyboards via Bluetooth or mini-USB. There's also a microSD slot to give you up to 32GB of local storage, should you want it. Plus, you can access your desktop using yours or your company's choice of virtualization technologies: Citrix, Microsoft or VMWare. Once plugged in, users can access a full Jelly Bean Android experience or their Windows and Mac machines via the aforementioned remote clients, and see them in 1080p resolution (on compatible displays, of course). Dell's pitching the dongle as primarily an enterprise solution, but the company also thinks it's well-suited as an educational tool, too. We got to see the Cloud Connect in action today at a launch event in Silicon Valley, and in our limited time with the device, it worked just as Dell said it would. The dongle itself is a bit bigger than your standard flash drive... it's roughly the size of an Apple TV remote. Installing the thing really is as simple as plugging it into a monitor, which turns said monitor into a fully fledged Android device. That means you have access to any compatible app from Google Play (or at least whatever apps your company's IT department allows). Speaking of, the Cloud Connect management dashboard allows IT administrators to easily set permissions and access for the dongles with a straightforward and simple interface.

As for consumer applications, Dell's VP and GM of cloud client computing, Steve Lalla, told us that his focus is on b2b for now, but regular folks are certainly on his radar. "It'll bleed into the consumer space," he said. "It's just that businesses already understand the value proposition of the technology." When we inquired about the possibility of building the Cloud Connect directly into monitors (essentially creating Android desktop computers), Lalla said that he has nothing to announce, but we get the feeling we'll see one from Dell before too long.

In this article: citrix, dell, dongle, hands-on, hdmi, mhl, virtualization, vmware, wysecloudconnect
All products recommended by Engadget are selected by our editorial team, independent of our parent company. Some of our stories include affiliate links. If you buy something through one of these links, we may earn an affiliate commission.