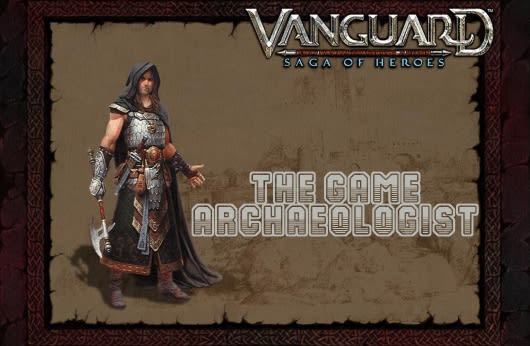 I have been wanting to do an article on the whole saga (small pun intended) of Vanguard for some time, and now that Brad McQuaid has returned with plans to make what appears to be a very similar game, I need no more prompting to do it.

The significance of Vanguard's development, release, ongoing drama, and its recent mild renaissance is of great interest not just to game historians but to everyone who plays MMOs, period. What happened with this game caused a huge fallout in the industry, and we are still feeling some of its effects even today. As our own Bree put it in her blog, "Vanguard's implosion was a big deal at the time and marked the beginning of the post-WoW destruction of the industry that hobbled Age of Conan and Warhammer Online a few years later."

While the crash and burn of Vanguard was a very well-known tale several years ago, I'm wondering if in 2014 there might be many who are quite unfamiliar with what happened to this unassuming SOE game eight years ago. Let me put on my old fogey glasses and we shall begin!

The rise of Vanguard

Brad McQuaid, a longtime MUD player and designer, was brought on board with Verant Interactive (later SOE) to work on EverQuest in the mid-1990s. He was best-known for his alias Aradune Mithara, a name which McQuaid clings to even today, and being part of a famous EverQuest guild called Fires of Heaven.

McQuaid worked his way up to the position of lead designer of EverQuest, where he enforced his capital-V Vision for the popular new MMO. His star was so on the rise, in fact, that a 2000 issue of PC Gamer listed him as one of "the new game gods" alongside American McGee and Stevie Case.

After becoming one of the top executives at SOE, McQuaid and fellow EverQuest alum Jeff Butler left in 2002 to found their own studio and make their own MMO. The studio would become Sigil Games, and the MMO was, of course, Vanguard: Saga of Heroes.

In 2003, McQuaid announced to the public that he had assembled a "dream team" to make an incredible MMO that would top his previous project: "Well, really, it's going to be the next big thing. We have EverQuest behind us, the most popular MMO in North America, and we have to at minimum one-up ourselves. Honestly, nobody in the all-star team that is Sigil would or could be satisfied with anything less."

The Vision that drove McQuaid's design decisions at EverQuest found a new home in this project. He had grand plans for the type of game Vanguard would become: an MMO that went back to MUD roots while learning from the current crop of games, had truly massive crafting and open-world housing systems, a dynamic weather system, a huge world, public dungeons, an innovative diplomacy system, and somewhat of a hardcore attitude. The team figured that there was a large segment of gamers that were dissatisfied with the increasingly casual-pandering environment in MMOs and wanted to go back to an era when time, effort, and consequences had meaning.

Sigil signed on with Microsoft in 2002 to be a co-publisher, although later McQuaid said it was a mistake not to get all of the details of the agreement regarding the project between the two companies in writing. Microsoft went on to fund Vanguard to the tune of $30 to $40M, a considerable sum for an MMO even today.

Microsoft became increasingly skittish about the development of Vanguard following a "regime change" in 2004, requesting more demos and milestones as time went by. Over the next couple of years, the two companies bickered, pointed fingers, made demands, and sowed sour grapes as competing (small-v) visions for the game became too different.

It also certainly didn't help that McQuaid and other Vanguard devs ignored the rising threat of World of Warcraft, dismissing it in conversations and never playing it in person. Other red flags started to pop up, such as the leadership refusing to allow the team to create scripting language and other necessary tools for the game.

By 2006's E3, Sigil Games had a strong following and a salivating press corps giving wind to the hype surrounding Vanguard. The team talked up how it had seven years of content already planned for the game, leading some publications to speculate whether the game might be "a true threat" to the behemoth of World of Warcraft. 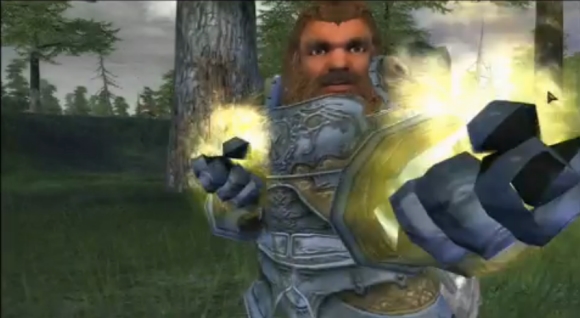 The fall of Vanguard

Meanwhile, tensions came to a boiling point between Sigil and Microsoft. According to McQuaid, the latter was losing a desire to create an MMO at all, especially one that wasn't a clear carbon copy of World of Warcraft, and Sigil started to look elsewhere for funding the home stretch of development. In May 2006, Sigil switched publishers from Microsoft to SOE. That was considered a blessing for the Sigil team, which enjoyed more freedom (and additional funds) under SOE than it had received from the demanding suits from Microsoft.

Following E3 2006, Sigil pushed to get the game into beta. While it was obvious to both Sigil employees and beta testers that Vanguard was far from ready for prime time, the devs ignored the criticism. Matters were worse than most assumed: There was only a single member of quality assurance working on the game through November 2006, McQuaid stopped coming into the office by the time Vanguard was in the second phase of its beta testing, and Jeff Butler disappeared as well, leaving a leadership void during a critical time.

Vanguard launched on January 30th, 2007, which was by admission of McQuaid and others on the team at least six months too early. But SOE needed to start turning a profit on what had been an expensive money sink, so out the door it went. Unfortunately, Vanguard had numerous bugs, hitching, lag, duping problems, and technical issues right out of the gate -- and the public wasn't willing to wait for the team to patch up the cracks.

In what was one of the worst scheduling decisions of video game history, Vanguard launched just a couple of weeks after World of Warcraft: The Burning Crusade came out roaring with several million copies sold on the very first day. To say Vanguard got steamrolled is an epic understatement; it got squashed like a very small insect under the efforts of some of McQuaid's former EverQuest co-workers. After its initial month was up, Vanguard had retained only 90,000 subscribers out of 200,000 copies sold at that point -- hardly the sign of "the next big thing."

The next several months were a grueling marathon of frantic fixes by the members of Sigil Games. McQuaid spent the time pointing fingers at the community as to why the game hadn't succeeded and predicted that Vanguard would soon pick up players bored with The Burning Crusade. But while employees saw the writing on the wall, few could have predicted what happened next.

On the afternoon of May 14th, the entire company was instructed to meet in the Sigil Games parking lot. It was here that Director of Production Andy Platter informed the staff that the game was tanking, Sigil was basically out of money, Vanguard was being sold to SOE, and everyone in the studio was fired.

One employee who was there recalled the now-infamous event: "The email said literally to check in any work we were working on, grab anything we'd need for the evening and meet out back for a short company meeting. We met in the parking lot. Worse still, though Dave [Gilbertson] was supposedly in charge all this time, Andy is the one who delivered the 'you're all fired' speech, while Dave never said a single word. It was very emotionless. Very callous. 'The deal is done, and basically you're all fired so some of you can be re-hired by SOE.' Bill [Fisher] was there and actually made comments about how he was likely buying a house thanks to his stock."

Brad McQuaid was nowhere to be seen on May 14th, allegedly too distraught to be there to see the end of Sigil and the termination of its staff. 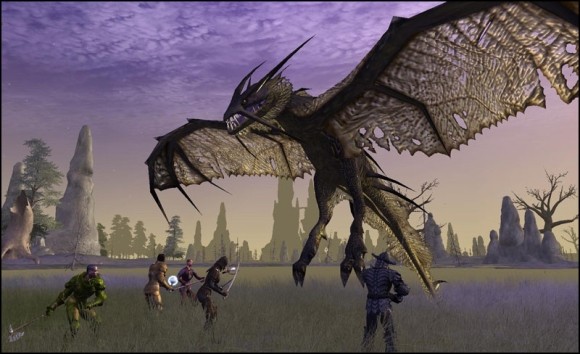 The rescue of Vanguard

From my observations, Vanguard was rescued twice.

The first was the day after the parking lot firing. SOE announced that it had acquired key assets to Sigil, keeping the doors opened while it hired back 50 to 75 of the 150 people fired the day before. McQuaid, surprisingly enough, wasn't let go, but he was demoted to the position of creative consultant.

SOE's move to reassure worried Vanguard players everywhere that the MMO would continue to operate under the guidance of a portion of its former team kept the community from scattering to the hills. While it crashed at launch and burned during the firings, Vanguard somehow survived to limp on as a complex, niche MMO that garnered a small but loyal playerbase.

Of course, it wasn't as though Vanguard was redeemed at that point; it was only saved. SOE eventually dissolved Sigil entirely and brought Vanguard entirely in-house. With a reduced development team and a missed opportunity for a strong launch, the game's fate seemed resigned to lingering in the shadows while being an example of "what could have been."

However, SOE rescued Vanguard for a second time several years later. In mid-2012, the studio announced that Vanguard would not be shuttered (as had been expected, along the lines of EverQuest Online Adventures) but would undergo the free-to-play conversion that other SOE titles had received. On top of that, Vanguard was given its first proper dev team in years. With a rejuvenated playerbase, F2P access, and actual content being developed after being in perpetual maintenance mode, Vanguard was able to walk tall after being hunched over in shame for so long.

Last week we got the news that Vanguard will indeed end its journey this year. Perhaps it's not the ending of a movie where the underdog wins it all, but I maintain that it's far better than a game prematurely canceled due to hubris, mismanagement, and a lack of understanding just where the industry was going.

As for McQuaid, he semi-quietly returned to SOE to take positions on both the EverQuest and Vanguard team, prompting a lot of raised eyebrows in the community. Life back at SOE must not have suited him, for he eventually left to create his own company and launch a campaign to fund Pantheon. It's anyone's guess whether McQuaid has learned from the lessons of Vanguard or whether he's trying his very hardest to reclaim a lost dream -- a lost Vision -- from so long ago.

For another take on the Vanguard saga, be sure to read Jef's Soapbox on the subject and MJ's farewell to the title.

When not clawing his eyes out at the atrocious state of general chat channels, Justin "Syp" Olivetti pulls out his history textbook for a lecture or two on the good ol' days of MMOs in The Game Archaeologist. You can contact him via email at justin@massively.com or through his gaming blog, Bio Break.
In this article: age-of-conan, brad-mcquaid, classic, classic-mmos, classics, e3, e3-2006, everquest, f2p, fantasy, featured, free-to-play, game-archaelogist, jeff-butler, nostalgia, opinion, pantheon, pantheon-rise-of-the-fallen, sandbox, sigil, sigil-games, soe, sony, sony-online-entertainment, telon, the-game-archaeologist, vanguard, vanguard-saga-of-heroes, verant, verant-interactive, vg, warhammer-online, world-of-warcraft
All products recommended by Engadget are selected by our editorial team, independent of our parent company. Some of our stories include affiliate links. If you buy something through one of these links, we may earn an affiliate commission.