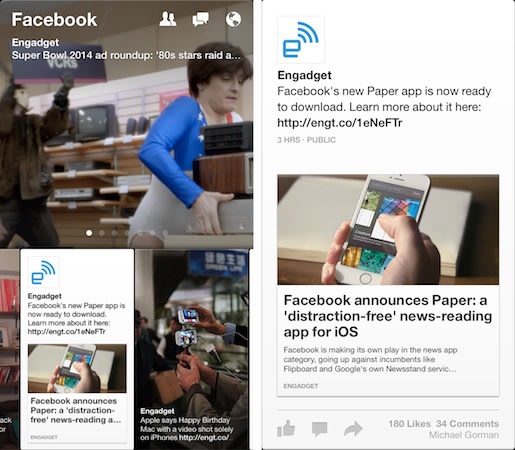 Upon installing Facebook's newest app, you're greeted by a friendly female voice. "Welcome to Paper," she says. And, for many folks, Paper will be a welcome change indeed. But, before we tell you why Paper may be preferable to the full Facebook app, let's establish just what Paper is -- it's only been a few days since it was revealed to the world, after all. Generally, Paper is a news-reading app that shows users the stuff they already get in their News Feed, in addition to stories pulled from third parties (including Engadget, of course) by Facebook's in-house team of tastemakers.

After its verbal welcome, Paper shows you a beautifully shot, superfluous bit of marketing video. (We've already downloaded the app, right? We don't need to be sold on it a second time.) It then tells you how to set things up. Should you already have Facebook installed on your phone, there's no need to punch in your login info again; Paper knows who you are and takes you straight into your notifications. We thought that was a bit odd, but we suppose seeing your notifications first is something that some users might appreciate.

Update: After chatting with Facebook, it turns out that we may have found a bug... the app's not supposed to take you to notifications before customizing your content sources. 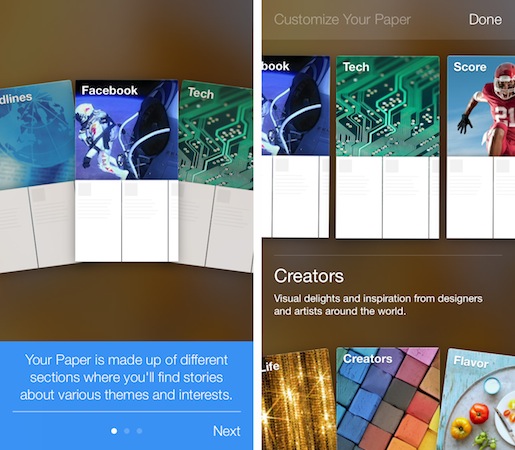 Regardless, upon dismissing the notifications window, the app then asks you to select the sources of news that you'd like to see. Your News Feed is, of course, selected by default, but you also get 19 other topics to choose from. Most are the usual subjects -- news, tech, sports, food, photography, etc. -- but there are some more unique choices, such as Ideas, which Facebook describes as "a daily, in-depth look at one standout idea, event or personality," and Equalize, which is news about eliminating gender bias and discrimination. Naturally, you can shuffle these topics any time you want in the settings, and you can also arrange them in any order you prefer.

Once you've chosen the stuff you want to read about, Paper takes you to its central navigation screen. The top half is occupied by the aforementioned topics, and will be very familiar to users of Facebook Home's Cover Feed. It cycles through stories from a particular feed every five seconds, and a tap takes you directly to the full post, where you can like, share or comment on it. The lower half is made up of a series of cards that are the full feed for a particular topic. Navigating through topics and individual stories is accomplished by swiping left to right, and switching back from individual stories to the main feed is done by swiping down from the top of the screen. After the app informed us how to navigate, it became second nature within a few minutes. We found the UI to be well thought out and intuitive. Our only quibble? We wished we could navigate among the posts that were cycling through the topic pane, instead of having to wait for the seemingly endless seconds required for the app to show posts we wanted to read, but missed the first time round.

In the lower carousel, individual stories are presented in a trio of ways: a white card with a tap-able link and an image, a card that is all image (cropped, à la Facebook Home) or a white card with a sub card that can be unfolded to view the full story. We've been unable to detect any rhyme or reason as to which of the latter two types posts get which stylistic treatment, and each type of card behaves a little differently. For instance, the two types of white cards look similar -- the only differences are that the first type I mentioned has a grayed-out "Continue Reading" link and there's an absence of text immediately beneath the image -- but they behave differently enough to be annoying. The first style requires tapping on the link to open up the full story on its associated web page, while swiping up on the picture simply moves the image around until you release, whereupon you get the full, non-truncated version of the image. Performing the swipe on the second style of white card allows you to unfold the story into its web page directly (similar to its competition, Flipboard).

Meanwhile, the full-image cards incorporate some motion control: Users can tilt their phones left and right to see the undisplayed portions of the picture (Update: Users can also hold their handsets still and move their head side-to-side to achieve the same effect -- the app tracks your face using the front-facing camera). It's a largely useless addition to the app, in our opinion, simply because you have to turn the screen away from your eyes to view the far edges of an image, which means you're seeing it at an oblique angle. Plus, you can simply tap the image or turn your phone (or iPod touch, in this editor's case) to landscape mode to see the full picture head-on. The good news is, you can shut the feature off if you want to.

Update on February 14: Facebook has informed us that the app works as was first described by this author, a miscommunication resulted in the first update. We have been assured that the app does not use the camera and does not track users' faces. 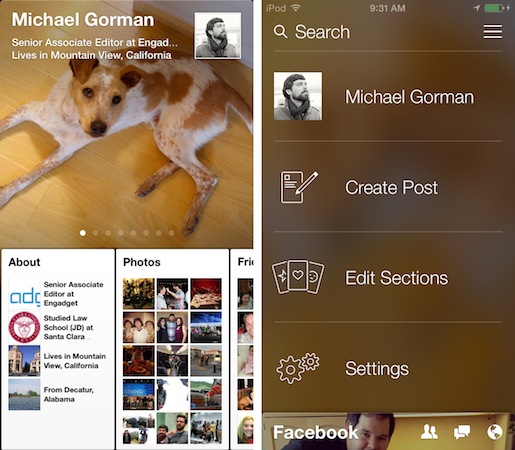 Aside from providing you with news to read, Paper also gives you limited access to Facebook in general. You can post to the social network, of course, and it lets you view your and your friends' photos, pages and posts. There's also search functionality and access to Groups, Events, notifications, messages and friend requests. Plus, you can change your account and privacy settings from within Paper, too.

We think that for many folks, Paper can serve as a main mobile Facebook access portal. As far as its UI is concerned, Paper puts the regular Facebook app to shame. Its swipe-based navigation is easy to use, and Paper reduces the amount of visual clutter on screen to a fraction of what you see in the full FB app. Because of that, it's better able to highlight the content that most users come to Facebook to see in the first place. That being said, Paper doesn't give power users full access to FB -- we couldn't find a way to access our Groups and apps, or Pages we administer, and that's just the shortcomings we found in our first few hours using the app.

In short, Paper's perfect if you're looking for a more beautiful way to consume News Feed content, but it may not suit your all your needs if you require more out of your social networking app.

In this article: app, facebook, flipboard, hands-on, ios, mobilepostcross, news, paper, social network
All products recommended by Engadget are selected by our editorial team, independent of our parent company. Some of our stories include affiliate links. If you buy something through one of these links, we may earn an affiliate commission.