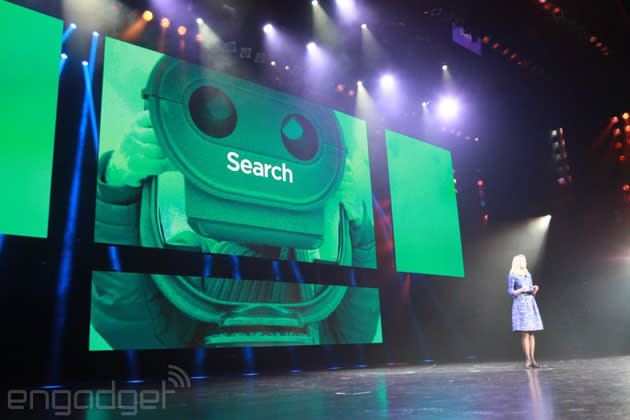 According to The Wall Street Journal, the next time you search for a chicken dinner on Yahoo you could be served up a Yelp review for the best bird in your hood. According to the paper's source, Yahoo CEO Marisa Mayer announced a partnership that would surface Yelp reviews and listing in Yahoo's search results, during a meeting Friday. Little else is known of the deal.

While the struggling internet company continues to see revenue fall, its latest earnings report revealed that search revenues for Q4 2013 were up eight percent over the same quarter the year before. The company is clearly still invested in its bread-and-butter, but it's also made a push into content, signing names like David Pogue and Katie Couric to lead new news initiatives. During her CES keynote earlier this year, Mayer, who previously led search at Google, underlined Yahoo's commitment to search, revealing it added 869 partners, and conducted 600 related experiments in 2013.

Source: The Wall Street Journal
In this article: marisa mayer, reviews, search, search engine, yahoo, yelp
All products recommended by Engadget are selected by our editorial team, independent of our parent company. Some of our stories include affiliate links. If you buy something through one of these links, we may earn an affiliate commission.