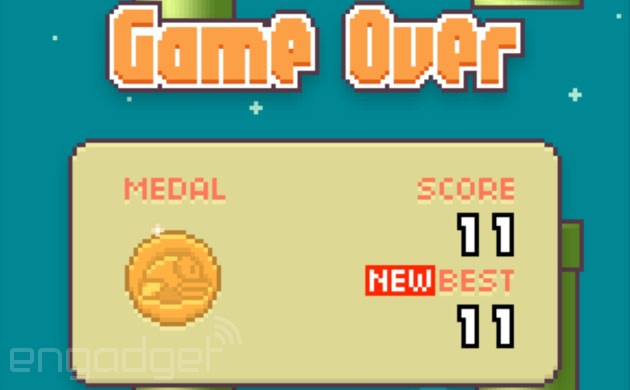 If you were hoping Flappy Bird would find its wings and fly back onto the App Store or Google Play, its creator has some tough news for you. Less than 48 hours after he pulled the explosively popular game, developer Dong Nguyen briefly emerged from his self-imposed exile to talk to Forbes about why that little bird will flap no more. According to Nguyen, the game was designed to help people relax, let players blow off some steam when they had a spare few minutes. Instead, Flappy Bird became an "addictive product" that was causing him, and its players, issues. Nguyen became the subject of intense media scrutiny, while players became enraged by their tragically low scores. "To solve that problem, it's best to take down Flappy Bird. It's gone forever," he told Forbes, shortly after he'd had an impromptu sit down with Vietnam's deputy prime minister.

Since it disappeared, owners of the app have put their phones and tablets up for bidding on eBay, with prices reaching $1,000 for an iPhone with the app pre-installed. Despite its popularity, and reports that Flappy Bird was reportedly making $50,000 a day in ad revenue, Nguyen says he has no regrets: "I don't think it's a mistake," he said. "I have thought it through." If you didn't manage to grab the app before it was pulled, there's no shortage of Flappy clones on the App Store or Google Play -- just in case you need a Flappy Angry Bird fix.

Source: Forbes
In this article: android, app, dong nguyen, flappybird, game, ios, mobilepostcross
All products recommended by Engadget are selected by our editorial team, independent of our parent company. Some of our stories include affiliate links. If you buy something through one of these links, we may earn an affiliate commission.