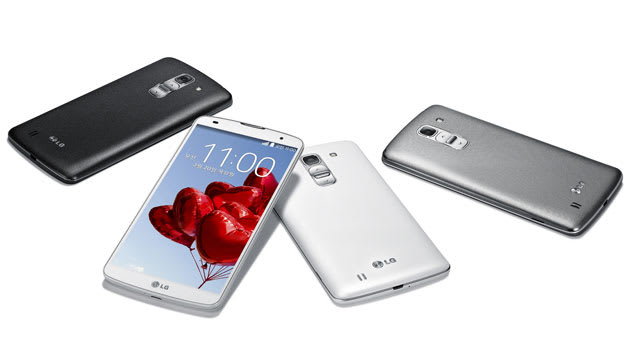 Looks like LG wants to get out ahead of all the smartphone news soon to come from Barcelona at Mobile World Congress, as the South Korean company has officially announced the G Pro 2. As prior leaks indicated, it's a larger version of the original G Pro -- it packs a 5.9-inch screen, as opposed to its predecessor's 5.5-inch panel. That means the G Pro 2 matches Samsung's Galaxy Note 3 in terms of size and it packs the same 1,920 x 1,080 resolution display. Additionally, it has an evolution of the G Pro's knock-to-unlock feature that allows you to unlock and power up the phone by tapping on the screen in a specific cadence.

LG's latest also has an optically stabilized, 13-megapixel camera and 32GB to store your photos and any 4K or 120 frames per second HD video you can shoot. Plus, it'll ship with Android's latest version 4.4 (KitKat) and can be had in three colors: white, silver and black. Naturally, LG has declined to give us a price or a ship date for its new flagship here in the States, but hopefully they'll give up all those details and more at MWC.

Source: LG Newsroom
In this article: 120fps, 4k, android, android 4.4, gpro2, kitkat, lg, mobilepostcross, mwc2013
All products recommended by Engadget are selected by our editorial team, independent of our parent company. Some of our stories include affiliate links. If you buy something through one of these links, we may earn an affiliate commission.