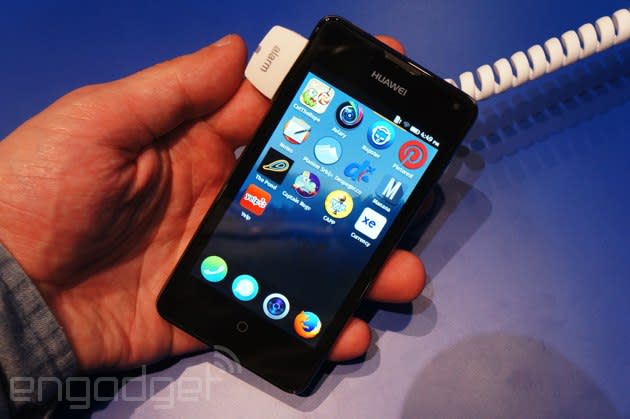 The Y300 marks Huawei's first entry into the world of Firefox OS. But unlike ZTE's Open C, this device runs FFOS 1.1 -- not the latest 1.3 build with its focus on stability. Regardless, the Y300 looks like much like its sibling FFOS devices in software and general build quality. The 4-inch handset has a WVGA display, 1GHz dual-core Snapdragon 8225 processor paired with 512MB RAM, 1,950mAh battery and is the first FFOS device to include dual cameras: a 5 megapixel module on back and VGA up front.

As we mentioned earlier, the build is nothing special, but that seems to be the common thread for FFOS devices. The Y300 has a black, all plastic hull that's marked by a power button up top and alongside the headphone jack, volume keys on the right edge and a micro-USB port at the base.

The FFOS UI appeared mostly unchanged on the Y300, but a Mozilla rep did confirm Huawei had made subtle tweaks including the addition of a rotation lock amongst other minor changes. Again, as we spent very little time with the handset, we weren't able to get a real feel for its overall performance, but the experience still centers around HTML 5 apps and the adaptive search bar powered by everything.me.

There's no specific release date for Huawei's Y300 yet, but we've been told to expect a retail launch within the next couple of months. Pricing as well is still yet to be disclosed, but given this is FFOS we're talking about, you can bet on it being affordable. In this article: firefoxos, firefoxos1.1, hands-on, Huawei, Huawei Y300, mobilepostcross, mwc2014, Y300
All products recommended by Engadget are selected by our editorial team, independent of our parent company. Some of our stories include affiliate links. If you buy something through one of these links, we may earn an affiliate commission.