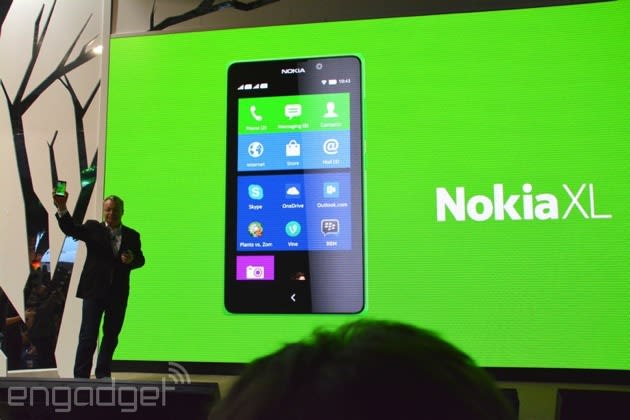 Well, Stephen Elop is just full of surprises today. On top of two other Android devices just launched, the Nokia X and the Nokia X+, we now have the Nokia XL, a bigger 5-inch Android device. It'll have a WVGA IPS screen, a 5-megapixel rear / 2-megapixel front camera with an LED flash, 768MB of RAM and 4GB of storage, expandable via microSD. As with the X and X+, there will be no Google services or Play store, so you'll have to access apps through Nokia's store and other third-party Android markets. It'll also feature the Android version of FastLane borrowed from Asha for easy access to apps and notifications. It'll arrive sometime to emerging markets in Q2 2014 priced at 109 euros -- but not to the US, for now.

In this article: Android, mobilepostcross, MWC2014, nokia, NokiaXL
All products recommended by Engadget are selected by our editorial team, independent of our parent company. Some of our stories include affiliate links. If you buy something through one of these links, we may earn an affiliate commission.