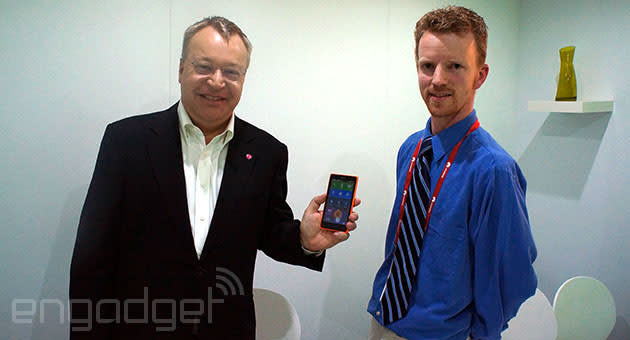 After Nokia's big announcement of the brand-new X series, we had a chance to sit down with Stephen Elop, the executive VP of Devices for the company. Naturally, the company's decision to crank out an Android device was a matter of great curiosity for us. Most importantly: Did Microsoft agree to this from the beginning, or did Nokia's acquirer go into this idea begrudgingly? According to Elop, it's the former. "Microsoft bought the Mobile Devices division," Elop told us, "so they knew what they were doing." Given the company's focus on a tile-based experience and its emphasis on the Microsoft Cloud, it's beginning to make a lot of sense. Elop went on to state that the X is primarily a stepping stone (a "gateway phone," if you will) for a largely untouched market segment -- emerging markets and developing countries -- to get acclimatized to Microsoft's suite of services and familiar Live Tiles interface. It's an interesting strategy, no doubt, and we're excited to see if it pays off in the long run -- people won't be rushing to a Windows Phone weeks after buying an XL, but it sounds like the idea is to plant a seed within consumers, as well as a reliance on services like Skype, Outlook and OneDrive. Our interview with Stephen in its entirety is below.

In this article: interview, microsoft, mwc, mwc2014, nokia, nokiax, stephenelop, video
All products recommended by Engadget are selected by our editorial team, independent of our parent company. Some of our stories include affiliate links. If you buy something through one of these links, we may earn an affiliate commission.