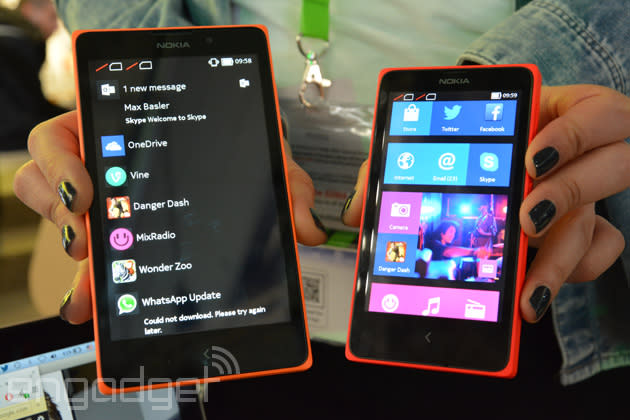 A couple of years ago, we would've said that the day Nokia announced an Android device was the day Hades froze over. The hour has come, however, and it's only slightly chilly this morning. The Nokia X is the company's inaugural Android-based devices -- three of them, in fact -- although it's been tweaked a little bit to fit Microsoft's and Nokia's preferences. The devices are known as the X, X+ (pictured above) and XL (pictured after the break), each of which differed by only a small number of factors; and at a cost of 89 euros ($122) for the X, 99 euros for the X+ and 109 euros for the XL, the family fits roughly in-between the Asha and Lumia series in terms of pricing and functionality. The X will be available immediately in growth markets (sorry, enthusiasts in the US, Korea and Japan, it won't be heading to your neck of the woods through official channels), while the X+ and XL will come later in the second quarter and will come in white, black, cyan, green, red and yellow. On the outside, the X and X+ both look a lot like a 4-inch version of the Asha 503, with the same matte polycarbonate chassis but without the transparent crystallic case surrounding it. It's not too tiny that it disappears in your hands, but it's also not too big to be overwhelming (unless you love larger devices, that is). At 10.4mm thick, it's not an incredibly thin device but its smaller size helps ensure that it's still a comfortable fit. (The XL is 10.8mm thick and offers a 5-inch display with the same resolution and 5MP rear camera along with a 2MP front-facing camera; we'll have more impressions of the XL shortly.)

The phone itself is certainly a basic device, and it shows on the hardware side: the X sports a 4-inch IPS LCD WVGA (800 x 480) display, 3MP fixed-focus camera, a 1GHz dual-core Snapdragon processor, 1,500mAh removable battery, 4GB of internal storage, a microSD expansion up to 32GB and 512MB of RAM; the X+, we're told, tacks on another 256MB of RAM and comes preloaded with a 4GB microSD card. For an inexpensive pair of devices destined for emerging markets, however, we doubt anyone will complain about the lack of premium specs. We've got a gallery of pics below, along with more of our impressions of the Android interface.

Of course, the most intriguing part of the device is the user interface itself. The X family uses a forked version of Android 4.1.2 that uses the standard AOSP but doesn't have access to Google's suite of services (such as the official Play Store, Gmail or other core apps). Nokia wants to ensure that the device is focused on Microsoft Cloud services such as Skype (the X will come with a free month of unlimited international calls), OneDrive and Outlook, and it also throws in features like Here Maps, MixRadio and so on. We imagine that putting the focus on these services was the only reason Microsoft would greenlight the project -- since this is destined for developing countries and emerging markets, it makes sense that Microsoft wants to get its foot into as many doors as possible. So what does a Nokia Android UX actually look like in real life? Not surprisingly, it's a lot like Windows Phone. The X launcher consists of a series of neatly lined-up tiles, although it's possible to add folders if you're overwhelmed by apps. Nokia claims that the X reflects the company's design heritage, and we have to agree -- despite its Android framework, it looks and feels very much like a Nokia device. The X also features a menu off to the side called Fastlane (which will be a familiar term for N9 and Asha users), which is the X's version of a notification menu and logs your favorite/most-used apps, nearly all of your activities, open apps and background processes on the same page. It sounds like a cluster of madness, but the company fortunately kept it looking pretty clean.

Since Nokia's running the show for all of the core apps, none of them actually look like the way Google has intended. One of our favorite touches was the clock, which Nokia basically copy-and-pasted from the N9. It also includes a Nokia-designed keyboard which even includes swiping gestures (a la Swype or SwiftKey). Third-party app stores and a file manager are also pre-installed. And although it doesn't use the official Play Store, the X will come with the Nokia Store preloaded.

This Store is supposed to feature plenty of Android apps, but they're specially curated by the company. When asked how particular they are, reps just told us that it's made things easy for devs: it'll be a matter of slapping in a few lines of new code into the same APK as they use for the standard Android build, submitting it to Nokia and then finally getting certified by the company. But if the app you're looking for is nowhere to be found in the Store, a screen pops up with suggestions for other third-party app stores which should feature that particular title. Or, if that doesn't work, nobody will be able to stop you from sideloading APKs into the phone for your personal use. Since the Nokia UX is simply built on top of AOSP, reps tell us that anything that's possible within the AOSP is technically possible to do on the X (think launchers, ROMs, widgets and so on). Will this version of Android get updated, though? It's never easy to say even for standard Android phones, much less one forked by Nokia. We're told that it will indeed be updateable (based on consumer need), and individual services can be updated as well; we'd like to give the company the benefit of the doubt, but the reality is that if it's not successful, there's nothing preventing Nokia from pulling the support plug.

Color us completely intrigued by the X. As long as you don't mind the user experience being kept under Nokia's control, it's definitely a fun phone to play with. We'll have to wait until our official review to offer a final judgment, but Nokia's new smartphone is fun, modern and colorful. We're still marveling that this kind of discussion is even taking place right now, but it's fantastic to see the "adventurous" side of both Microsoft and Nokia. Let us take you for a spin on the Nokia X software in the video below.

In this article: android, google, hands-on, microsoft, mobilepostcross, mwc2014, nokia, nokiax, nokiax+, nokiaxl, video
All products recommended by Engadget are selected by our editorial team, independent of our parent company. Some of our stories include affiliate links. If you buy something through one of these links, we may earn an affiliate commission.