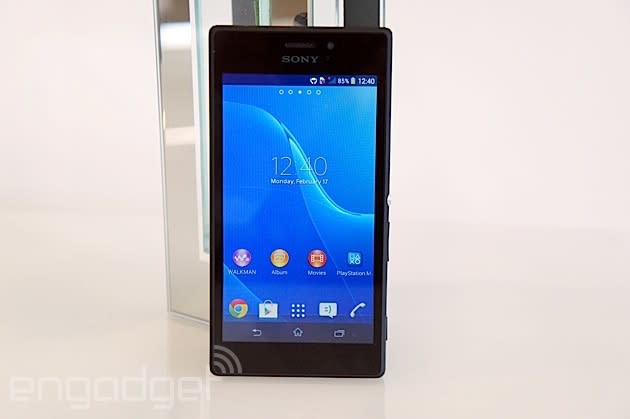 Sony's come to Mobile World Congress with three brand-new devices. Its new flagships, the Z2 smartphone and Z2 Tablet, may attract all of the attention, but there's a budget-friendly handset it also wants you to get to know: the Xperia M2. Acting quickly to replace the still youthful Xperia M, which only launched in June of last year, Sony has injected new life into its mid-ranger by including a larger 4.8-inch qHD display, a 1.2GHz quad-core processor, 8-megapixel camera, 2,300mAh battery and LTE support to take care of your increasing thirst for data. While the Xperia M was far from a benchmark-buster, Sony tells us that its successor is the best in class on device thickness, display size, camera resolution and processor cores. We'd say its main competition comes in the form of the Moto G, which impressed us when it launched last year. Its slim 8.6mm profile, NFC and LTE support certainly help in that regard, especially as the Moto G is 3G-only, but the Xperia M2's 960 x 540 display is some way off its rival's.

For Sony, diversity certainly isn't key when it comes to handset design. The Xperia M2 may lack the top-level internals found in the Z2, but it's rocking the same "OmniBalance" design as Sony's new flagship. You'll notice, on closer inspection, that its lacks the premium finish of the Xperia Z2, but for those looking for flagship looks at a mid-range price, the Xperia M2 will still invoke the odd double-take.

We're still waiting on exact pricing info, but what we do know now is that Sony is looking around the €220 ($302) mark. It's not limiting its launch either: black, white and purple variants are all set to hit stores when the company launches the Xperia M2 globally in April.

In this article: android, budget, mid-range, mobilepostcross, mwc2014, sony, video, xperia m2
All products recommended by Engadget are selected by our editorial team, independent of our parent company. Some of our stories include affiliate links. If you buy something through one of these links, we may earn an affiliate commission.