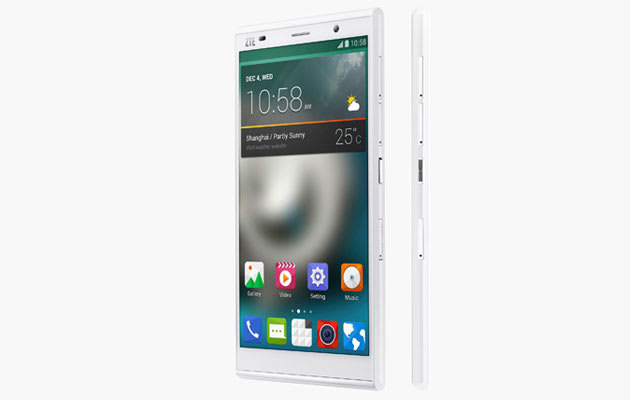 ZTE, like fellow Chinese ODM Huawei, is hoping to become more famous for the hardware that it makes under its own flag, instead of the gear it makes for other people. A year after the Galaxy Note-troubling Grand Memo, the follow-up has made its public debut here in Barcelona. Beneath the 6-inch HD display, you'll find a Qualcomm Snapdragon 400, paired with 2GB RAM, 16GB storage, LTE radios and a 13-megapixel f/2.2 primary camera. Selfie enthusiasts, meanwhile, will be pleased to see their faces are captured in five glorious megapixels with the forward-facing lens. Android 4.4 (KitKat) has been squeezed into the handset's 7.2mm frame, coated in a thick skin of the company's MiFavor 2.3 user interface. ZTE is promising that you'll get a few days of normal use out of the phone's 3,200mAh battery, and that it'll last for a full 16 hours playing HD video. It'll start out in China at some point during April, with Europe, North America and Asia Pacific to follow, and while the company hasn't talked pricing, we assume it'll undercut its rivals in the 6-inch market.

In this article: 2014, Grand Memo II LTE, mobilepostcross, MWC, mwc2014, ZTE
All products recommended by Engadget are selected by our editorial team, independent of our parent company. Some of our stories include affiliate links. If you buy something through one of these links, we may earn an affiliate commission.