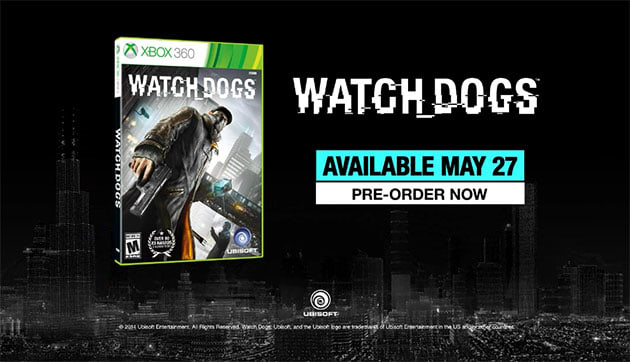 When Ubisoft showed off Watch Dogs for the first time in 2012, there was no such thing as PlayStation 4 and Xbox One. Well, okay, they existed in some sense of the word, but both consoles were far from publicly ready, making Watch Dogs an unbelievably pretty game for Xbox 360 and PlayStation 3. Unbelievable to the point that many journalists were incredulous about it not being touted as intended for next-gen, but Ubisoft couldn't say it was headed to unannounced consoles. In so many words, Watch Dogs was essentially the first "next-gen" game shown off ... even before the consoles were unveiled. It's somewhat hilarious then that we're here to tell you today that Watch Dogs now has a release date -- May 27th -- after being delayed past the actual launch of the new consoles. It's unclear if that means all versions (Xbox 360, Xbox One, PlayStation 3, PlayStation 4, PC and Wii U) will arrive on the same day, though the Wii U version was already given a release date sometime after the other versions. Sorry Wii U, owners!

Source: Ubisoft
Coverage: Joystiq
In this article: hdpostcross, microsoft, nintendo, pc, playstation3, playstation4, ps3, ps4, releasedate, sony, ubisoft, ubisoftmontreal, video, watchdogs, wiiu, xbox360, xboxone
All products recommended by Engadget are selected by our editorial team, independent of our parent company. Some of our stories include affiliate links. If you buy something through one of these links, we may earn an affiliate commission.