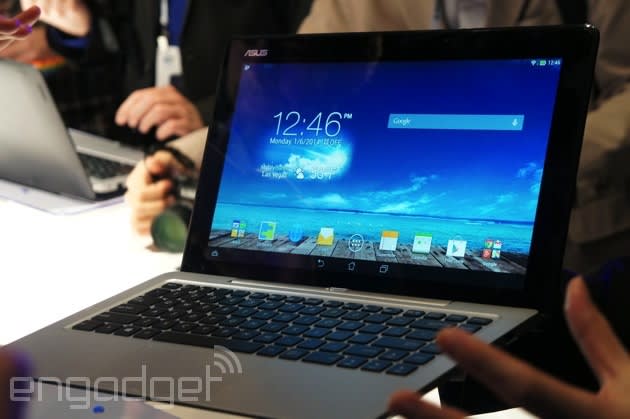 One of the more interesting laptops we saw at this year's CES was a split-personality hybrid from ASUS -- the Transformer Book Duet TD300, shown above. According to the Wall Street Journal, however, plans to launch the device during the first half of this year have been shelved due to resistance from both side of OS camp, i.e., Microsoft and Google. ASUS declined to comment on this when we asked them, but the WSJ's story tallies with an earlier rumor from DigiTimes. The report also claims that sales of two of ASUS's existing dual-OS products, the the P1801 and P1802 all-in-one PCs, are to be suspended due to Microsoft's "new policy" of not supporting dual-boot systems. On the other hand, none of this really jibes with rumors from the smartphone side of the market, where Microsoft is apparently willing to try anything in order to boost the popularity of the mobile version of Windows.

Source: Wall Street Journal (pay wall)
In this article: android, asus, dual-boot, dual-os, google, microsoft, td300, transformerduet, windows
All products recommended by Engadget are selected by our editorial team, independent of our parent company. Some of our stories include affiliate links. If you buy something through one of these links, we may earn an affiliate commission.