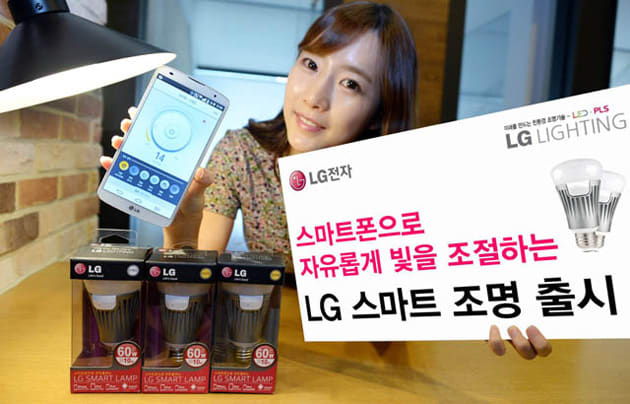 LG isn't about to let household heavyweights like Philips corner the connected lighting space -- it just unveiled the Smart Lamp, its first take on the concept. The 10W LED bulb gives Android and iOS users a familiar level of control over their illumination, including a light-based alarm clock and a security mode that pretends you're at home. There are a couple of noteworthy tricks in this initial offering, however. The light connects through both Bluetooth and WiFi, letting it pull the sync-based stunts we've seen in a few other bulbs: it can flash when you get a phone call, or (with Android) pulse to the beat of the music. The Smart Lamp is more expensive than ordinary LEDs at 35,000 won ($32) in LG's native Korea, but it could be a good deal if you don't need the many-colored lighting of Hue and similar systems. Unfortunately, there's no word on whether or not it's coming to the US.

Via: Android Central
Source: LG (translated)
In this article: android, HomeAutomation, household, internetofthings, ios, iphone, led, lg, lighting, smartbulb, smartlamp, SmartLighting
All products recommended by Engadget are selected by our editorial team, independent of our parent company. Some of our stories include affiliate links. If you buy something through one of these links, we may earn an affiliate commission.