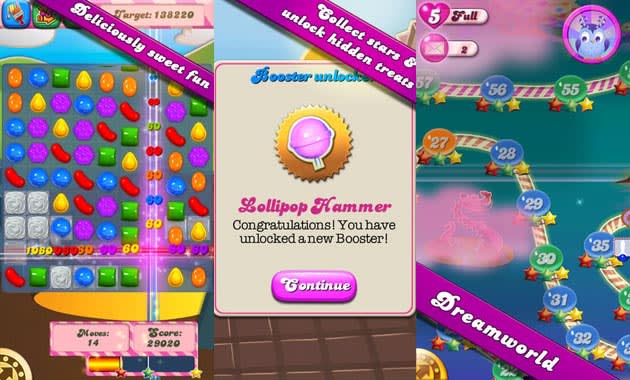 King, the company behind the Candy Crush saga filed its IPO today, but is the maker another Zynga (Farmville), another Rovio (Angry Birds) or something else again? Nearly 100 million users play Candy Crush every day, and while the company's titles remain free to play, it depends on virtual goods, additional levels and content purchases to bring in the cash. Selling shares at $22.50, it's raised around $500 million for the company and its early investors, valuing King at around $7 billion.

The company apparently isn't going public because it needed the money, however, but because it will give the company stock it can use to make acquisitions... and let investors cash out if they want to. Shareholders will be pushing the gamesmaker to repeat the success of Candy Crush, something that more recent titles, like Farm Heroes saga, haven't (so far, at least) been able to accomplish.

Source: NY Times, WSJ, SEC
In this article: candycrush, candycrushsaga, ipo, king
All products recommended by Engadget are selected by our editorial team, independent of our parent company. Some of our stories include affiliate links. If you buy something through one of these links, we may earn an affiliate commission.