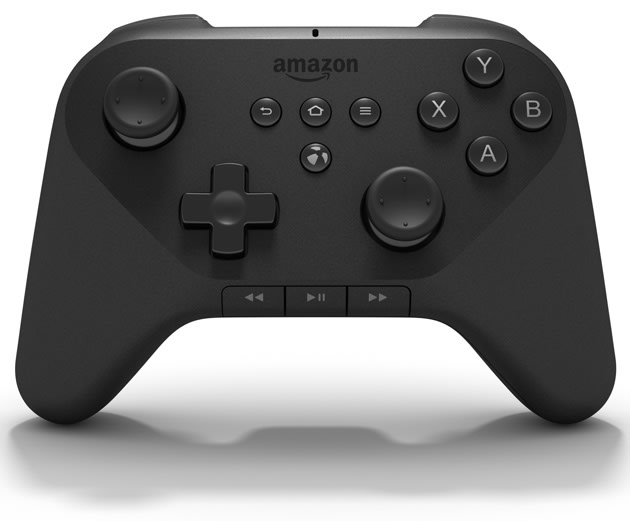 We all expected this, right? Yes, Amazon has a game controller, and it works with the company's newly announced Fire TV. Sure, you could use the set-top box's remote or an upcoming custom app to play games, but there's a dedicated controller too that's ready to wrangle Minecraft Pocket Edition, NBA 2K14 and titles from other big-name developers Ubisoft and Take-Two. "The controller is comfortable; it's familiar," noted Amazon Games' Mike Frazzini. As you might expect, this means that there's a four-button, dual-thumbstick and d-pad layout similar to the Xbox's option. With Amazon's offering, there are skip and play/pause media controls along the bottom edge with navigation controls placed front and center. There's even a GameCircle button that offers easy access to scores and achievements. And yes, dual triggers and a pair of shoulder buttons rest along the top edge. Amazon's Fire wireless game controller runs on two AA batteries and touts 55 hours of juice before needing a rest -- thanks to "Intelligent power management with auto-sleep." The accessory will set you back an additional $40, but it'll come with 1,000 Amazon Coins and Sev Zero (an Amazon Game Studios third-person shooter) to get the action started. What's more, the outfit says that the average price of games on its platform is around $1.85 with over 1,000 free options to boot. That's good, because from the looks of things, Amazon's own game devs are hard at work on a truckload of titles that are "coming soon." If you're itching to place your order, jump over to the source link to do just that.

10
Source: Amazon
In this article: amazon, Amazon Game Controller, amazoncontroller, amazonvideo2014, android, controller, hdpostcross, WR26UR
All products recommended by Engadget are selected by our editorial team, independent of our parent company. Some of our stories include affiliate links. If you buy something through one of these links, we may earn an affiliate commission.