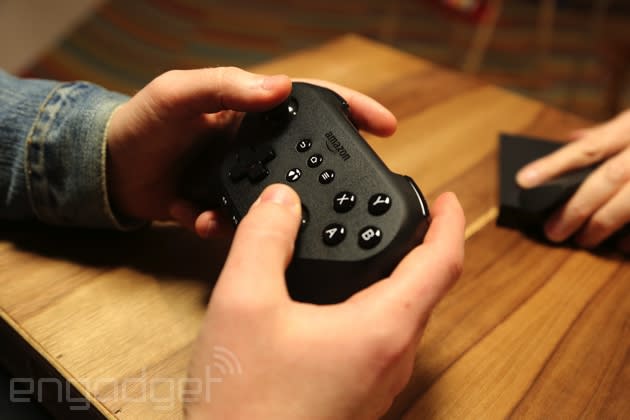 What is Fire TV? Well, it's Amazon's set-top box. Er, at least it has that functionality. But Fire TV does more than just stream media, thankfully; we've got plenty of devices that do that stuff. The $99 tiny black box that Amazon unveiled this morning in New York City streams media (video and music through a variety of services) and it also plays games. Despite that being half the device's functionality, Amazon VP Pete Larsen reassured us that Fire TV "isn't trying to be a game console."

So, what is it trying to be then?

Good question -- even Larsen doesn't know. We asked him what product category Fire TV is aimed at. "We didn't really think about that," he told us. "We looked at what customers were doing with the current streaming media devices out. We tried to mine the customer reviews to find what was working and not working. And then we say to ourselves, 'How do we solve those problems?' Which we did, with performance, voice search and open ecosystem."

Amazon's "create-a-market" approach isn't new to the company. The Kindle is but one example of Amazon creating a market by creating a product. In the case of the Fire TV, a $99 box that straddles the worlds of set-top box and game console, it's less clear that a market is ripe for creation. Larsen disagrees. "This isn't trying to be a console, but we do think there's a great opportunity there in between a console and a smartphone for fun, quality games," he told us. Time will certainly tell, but Amazon's far from the first to broach that angle (OUYA, anyone?).

Regardless of the hardware involved, there's no doubt that Amazon's making a massive gaming push with Fire TV. Even if the device ultimately doesn't succeed, Amazon's mass-hiring veteran game devs like Kim Swift, Clint Hocking and Ian Vogel (and buying studios, like Double Helix) to build internal talent. There are swathes of internal teams working on dozens of games for Fire TV, all created in-house at Amazon Game Studios. The man heading up games for Amazon, Mike Frazzini, told us that's exactly the idea. 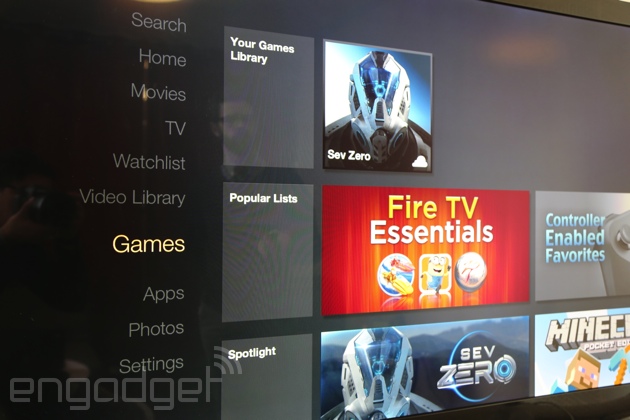 "We're taking this very seriously; we're committed; and we're making big investments," he said. Frazzini spoke to the history of Amazon's game investment, calling Game Studios "a few years" old, though it's only within the last year that his staff really ramped up development. Indeed, the few developers on-hand at this morning's event echoed that sentiment -- Minecraft studio Mojang said it got the Fire TV build of Minecraft: Pocket Edition running in just the past few weeks (with some help from Amazon). The same goes for the folks at Telltale Games, who only first started working with the Fire TV in January (they're jumping in headfirst on support, with The Walking Dead Season One available at launch and other Telltale Games titles arriving later this year).

At very least, even if the half-media player/half-sorta-kinda game console idea that is Fire TV doesn't work out in the long term, Amazon's making a seriously major investment in the world of video games. And that -- regardless of the rest of today's news -- is a seriously interesting piece of news.

Coverage: Kotaku
In this article: amazon, amazonfiretv, firetv, hdpostcross, mikefrazzini, petelarsen
All products recommended by Engadget are selected by our editorial team, independent of our parent company. Some of our stories include affiliate links. If you buy something through one of these links, we may earn an affiliate commission.