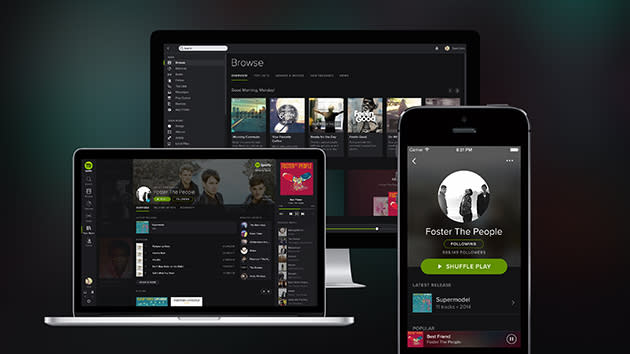 If you're using Spotify on the web, desktop or iOS you should notice a pretty massive change starting today. (The new look should be coming to Android "near future.") The company is launching its most dramatic overhaul since its launch in 2008. Most noticeably, it's flat and dark. Like Swedish death metal dark. The gray and white elements it experimented with over the last couple of years have been banished and it has returned to its roots with a UI that is primarily black and slightly lighter black. Sure, there are still green highlights and the new rounded (dare we say finger-friendly) icons are a lighter shade of gray, but the overall effect is one where the most important element -- the content -- jumps off the background. Of course, if Spotify simply painted everything black that wouldn't be big news. The redesign touches on almost every element of the experience. The edges are softer, there's a heavy use of blurring on background images (especially in the mobile app) and there's a new typeface, Proxima Nova, that's clean and heavily rounded. Despite the starkness of the UI elements, these touches make the app feel warm and inviting. The new look also borrows flourishes from social networks. Artist and user pages now feature a round profile image against a large cover photo and content is now presented as image-heavy cards when browsing. Those round profile photos also give you a quick visual cue to let you know a card is for a person or artist, rather than a song or album. In general you'll notice a lot more images throughout the interface, and big ones at that.

The overall look is not that unlike a dark cousin of Google+, at least in the browser. The desktop client uses many visual elements as the redesigned web player, but still retains some of the more traditional media manager elements. The mobile app employs a heavy does of transparency and slides around individual UI elements to keep them out of the way and maximize screen real estate. It also makes the shift to a tabbed interface that more inline with modern design trends.

The changes are not purely cosmetic either. The company has finally fully implemented search as you type across all platforms, and it's blazingly fast. This will also be the first time that many users will get to enjoy collections -- a feature that has been rolling out painfully slowly. Rather than being forced to save albums as playlists, users will simply be able to add them to their library for quick and easy access.

For more about Spotify's effort to breathe new life into its streaming music service, read our additional coverage here.

In this article: app, hdpostcross, mobilepostcross, music, redesign, spotify, uk-feature, video
All products recommended by Engadget are selected by our editorial team, independent of our parent company. Some of our stories include affiliate links. If you buy something through one of these links, we may earn an affiliate commission.