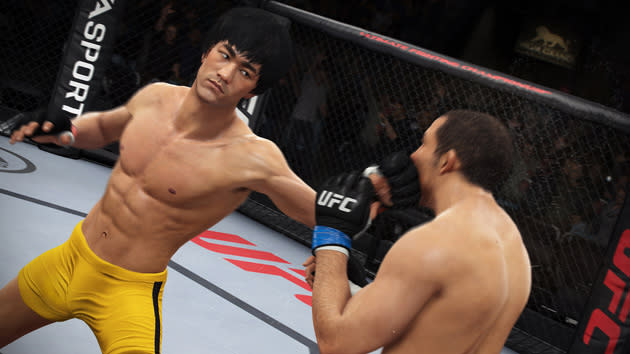 If you're EA, how do you build up hype for EA Sports UFC -- a license-based fighting game where players will largely know what to expect? You promise them Bruce Lee, that's what. Yes, PS4 and Xbox One gamers will get to pit the Game of Death star against the UFC roster despite a 41-year gap separating the two. You'll have instant access to Lee if you pre-order, and he's otherwise unlockable. EA justifies this by contending that Lee is the "father of mixed martial arts;" that sort of makes sense given Lee's style and Judo knowledge, but the inclusion stretches the definition of MMA (and, arguably, taste) to the limit. If you've ever wanted to know how Jeet Kune Do fares against Brazilian Jiujitsu, though, you now have a good reason to look forward to EA Sports UFC's release on June 17th.

In this article: brucelee, ea, easports, fighting, gaming, ps4, sports, ufc, video, videogames, xboxone
All products recommended by Engadget are selected by our editorial team, independent of our parent company. Some of our stories include affiliate links. If you buy something through one of these links, we may earn an affiliate commission.