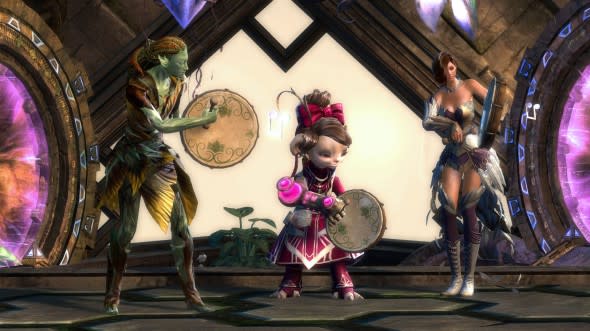 You could be forgiven for overlooking the new drum in Guild Wars 2's cash shop -- it's just a cosmetic thing for roleplayers who stand around town, right? Well, not exactly, and a developer diary from ArenaNet audio programmer Aaron McLeran aims to explain why you should care (and buy all the things). The drum actually allows players to select from two modes: a pre-set groove mode, which lets you auto-play several drum tracks solo or in time with other players' tracks, and user groove mode, which starts to travel into Lord of the Rings Online territory. Says McLeran,

The first five skill buttons have five unique drum sounds respectively. Each sample can be triggered individually so the drum can perform like our previous instruments in free-play mode. The only difference is the drum will quantize beat events so that they always sound good to you – and in rhythm. If you push the sixth or seventh skill slot, you put the drum into "loop-record" mode. If this is the first time you've pushed it, you'll hear a nice little click-track (that only you can hear!) that gives you an idea of where the "global" pulse is. Think of it like a count off: "A one, a two, a one two three four!" Then, when you push the drum sample set skill buttons again, they'll actually loop back on themselves. You can build up ever more complicated and funky grooves.

We just have one question: Where's our Bard class?
Source: Dev diary
Coverage: Official site
In this article: aaron-mcleran, anet, arenanet, bard, buy-to-play, dev-blog, dev-blogs, dev-diaries, dev-diary, dev-post, dev-posts, developer-blog, developer-blogs, developer-diaries, developer-diary, developer-post, developer-posts, drum, fantasy, guild-wars-2, gw2, music, ncsoft
All products recommended by Engadget are selected by our editorial team, independent of our parent company. Some of our stories include affiliate links. If you buy something through one of these links, we may earn an affiliate commission.