Nikon's latest high-speed mirrorless cameras come to the US 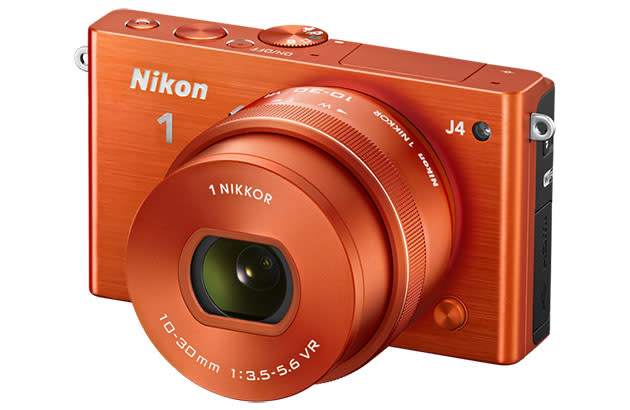 Good things happen when you cram a fast image processor into a small camera body, as Nikon has shown with its new mid-range 1 model, the J4. With the latest Expeed 4A imaging engine, the CX-sensor camera can now pump out 20 images per second in burst mode with continuous AF, which Nikon claims is the world's fastest (along with the pricey new V3). That's also a big bump over last year's J3, and most other specs have also improved: there's now 18.4 instead of 14.2-megapixels, 1080/60p video in lieu of 1080/60i (with 120fps at 720p), a 105 point PD/171 point contrast AF, a new touchscreen and built-in WiFi. One change photographers may not like is the use of MicroSD memory cards instead of industry standard SD cards, but at least the J4 is slightly smaller and lighter than the J3. It'll come in black, white, silver and orange (with an optional underwater housing) but there's no word on when, where or for how much. As a rough starting point, though, last year's model was $600 with the 10-30mm kit lens.

In this article: CX, ILC, InterchangeableLens, J4, nikon, Nikon1, Nikon1J4
All products recommended by Engadget are selected by our editorial team, independent of our parent company. Some of our stories include affiliate links. If you buy something through one of these links, we may earn an affiliate commission.