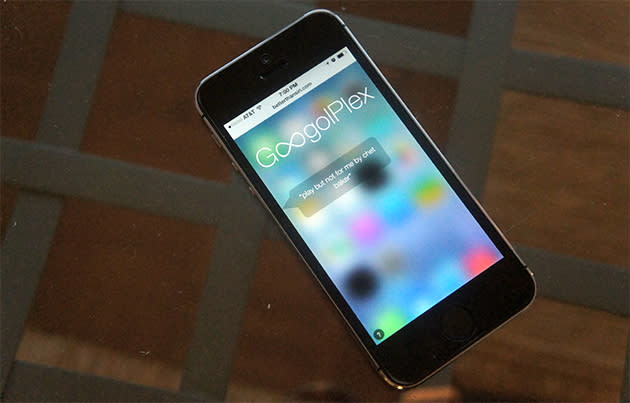 We already know Apple is working on improving Siri, but gosh dangit, the folks in Cupertino just aren't moving as fast as some would like. That's why a quartet of freshmen at the University of Pennsylvania decided to try making Siri do more on their own... at a hackathon, no less. They wound up taking third prize for the hack -- called GoogolPlex -- and after some fine-tuning, Alex Sands, Ajay Patel, Ben Hsu and Gagan Gupta are ready to help you make your virtual assistant do more. The setup process is trivial: you just have to change your WiFi connection's proxy settings (seriously, it'll take five seconds). Once that's done though, you can invoke Siri and ask GoogolPlex to play tunes in Spotify, crank up the heat on your Nest thermostat or even start your Tesla.

Fiddling with proxy settings may not be your cup of tea, but it's actually crucial to how GoogolPlex works. You see, Siri parses these voice commands and sends them along to Google as search terms, but Googolplex intercepts that text and chews on it so it knows what service's API to interact with (don't worry, Gupta says none of your commands are ever stored). Hell, if you happen to be conversant in code, you can cobble together your own GoogolPlex commands for other apps too. Case in point: the team was originally going to reveal GoogolPlex with a Venmo command to initiate payments by voice. The full, more technical explanation can be found here.

Is it neat? You bet, especially since older projects that tried to do the same were a hassle to set up. Is it a totally polished way to expand Siri's mind? Erm, not quite. You can bark commands at Googolplex all you like, but actually getting a response takes a little time since you're always routed to Safari. Still, not a huge deal considering you can coax Googolplex into doing things Siri just can't. It's only a matter of time before Apple pushes out a shiny new build of iOS that makes some (or most) of what this hack does redundant, but for now, it's time to get a-tinkerin'.

In this article: apple, googolplex, hack, mobilepostcross, proxy, siri
All products recommended by Engadget are selected by our editorial team, independent of our parent company. Some of our stories include affiliate links. If you buy something through one of these links, we may earn an affiliate commission.