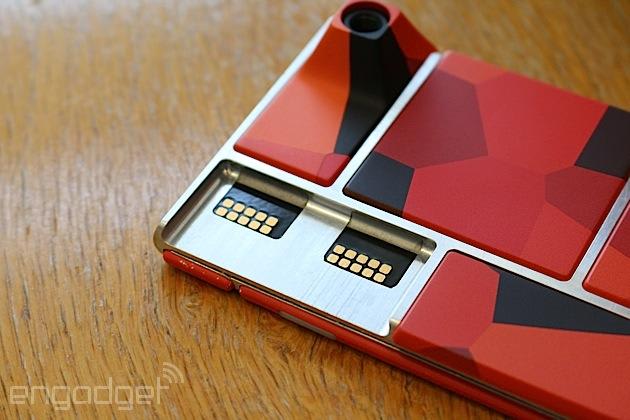 Project Ara is primarily focused on building a modular smartphone in the hopes of changing the industry, but is that the only type of mobile device on the drawing board? Absolutely not. An executive at Toshiba, one of Google's partners on the project, just revealed that his company's vision of the concept goes beyond smartphones. Shardul Kazi, Senior VP and Technology Executive at Toshiba, posited that devices like smartwatches (and beyond, he says) could also take advantage of Ara's blocky component modules, which allow you to mix and match whatever features and components you want to have. During his presentation at the Ara Developer Conference, Kazi showed the above slide depicting a module being removed from the Ara phone and placed into a wearable device. Indeed, just as the handset has an endoskeleton that makes it possible for blocks to attach to the phone in the first place, a future wearable could certainly be constructed the same way. Kazi's example here relates to activity trackers with nine-axis sensors and Bluetooth LE, but it's not limited to just that particular use case; such a thing would be wide open to the imagination of module makers and developers.

Kazi's quick to point out that this is purely an idea at this point and isn't actually in development. Still, it goes to show how easily adaptable this kind of platform could be to other form factors -- if consumers love using modular smartphones, might they feel the same way about modular tablets, smartwatches and other wearables? Naturally, the folks behind Ara don't want to bite off more than they can chew -- just putting together a phone in less than two years is a job and a half for the team, after all -- but it makes sense to see how many other ways the same tech can benefit our lives.

In this article: ara, atap, google, googleatap, mobilepostcross, modularsmartphone, projectara, smartwatch, toshiba, wearables
All products recommended by Engadget are selected by our editorial team, independent of our parent company. Some of our stories include affiliate links. If you buy something through one of these links, we may earn an affiliate commission.