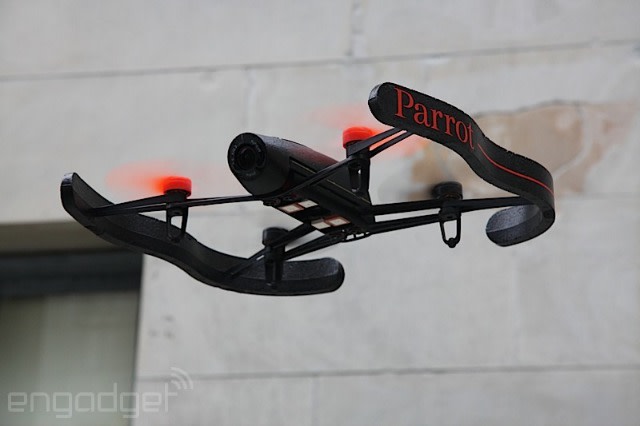 Parrot still hasn't released that MiniDrone we saw at CES, but its already got something new up it's sleeve: BeBop. Unveiled Monday, the indoor/outdoor quadricopter has a new accessory for extended-range flights, and gives fliers the ability to control its camera using a virtual reality headset. Bebop isn't expected to hit store shelves until later this year, but Parrot let us take one of its few prototypes out last week for a maiden voyage in San Francisco. The first thing you'll notice is that Bebop looks a little different than other consumer drones. When you're flying in the living room, styrofoam bumpers attach to each side of the aircraft to prevent you from damaging the drone running into walls or ceilings (which, lets face it, we're all prone to do). However, when you're out later at the park the bumpers can come off for unfettered flight. Under the hood, the drone has a combination of sensors (a 3-axis accelerometer, gyroscope and magnetometer if you're interested) that make for an ultra-smooth experience, even in windy conditions. That means if you're trying to fly outside you don't have to worry about a strong breeze accidentally throwing Bebop onto your neighbor's roof. It was one of the most stable drone flights we've ever seen in action, even when it was forced to stand up to San Francisco's winds and an untrained pilot simultaneously.

Regardless of where you're flying, you won't be in the air long. Flight time is just 12 minutes on a full battery charge.Much like Parrot's previous drones, you control that flight using your iOS or Android device and Parrot's controller app, FreeFlight. The application is getting an upgrade to version 3.0, that brings a streamlined experience, but still sports many of the same features you'll find in the older version such as the ability to share videos or program flight paths.

Your iPhone connects to the drone using Wi-Fi, which means you can have up to 300 meters between the two at any given time. If you want to go a little further (and let's be honest, who doesn't?), Parrot has a new accessory called Skycontroller to make your dreams come true. It's essentially a large brightly colored dock for your phone or tablet that gives you physical controls on each side and, more importantly, a giant antenna on top that extends your Wi-Fi range to a whopping 2 kilometers. 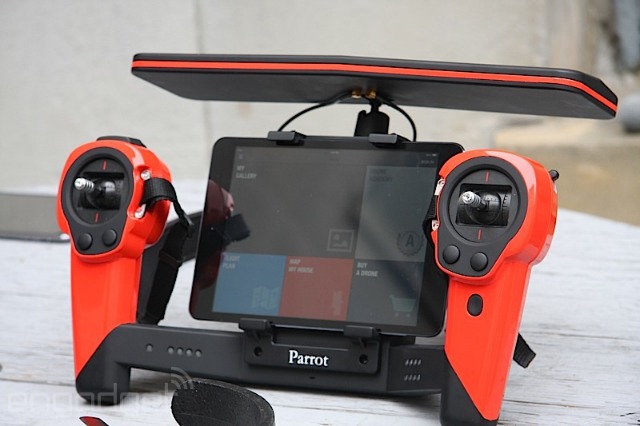 The camera is one of the things that make's Parrot's previous drones special, and Bebop is no different. The front of the drone has a 1080p/14-megapixel fisheye lens capable of capturing 180-degree view of the world below. The camera is mounted in a special shock-resistant way that makes video as smooth as possible. 8GB of built-in flash memory stores MP4 and JPG evidence of your high-flying adventure, and controls on your device's screen allow you to turn the camera how you choose.

If you have a virtual reality headset like Oculus Rift laying around, it can be connected to the Skycontroller and pilot the drone's camera as well. We were able to demo it a bit with the prototype, and while it doesn't quite feel like you're flying in the clouds, the experience is pretty interesting. Moving your head around with Oculus controls the drone's camera, but not its movement. Using a VR headset means you'll need to practice up with the Skycontroller beforehand, since you won't be able to see it with something covering your eyes. Overall, it's an awesome trick that's bound to impress your friends if you happen to own both devices, but isn't an experience we could see ourselves wanting very often.

If you're anxious to get your hands on Bebop, you have a little bit of a wait ahead of you. Parrot plans to release the drone in the fourth quarter of this year packaged with and without the Skycontroller. However, the company isn't quite ready to announce an exact date or pricing. A representative told us to expect an MSRP "on par with other consumer drones." Our guess is something roughly in the $300-$400 range.

In this article: ar drone, bebop, drone, hands-on, parrot, quadricopter
All products recommended by Engadget are selected by our editorial team, independent of our parent company. Some of our stories include affiliate links. If you buy something through one of these links, we may earn an affiliate commission.