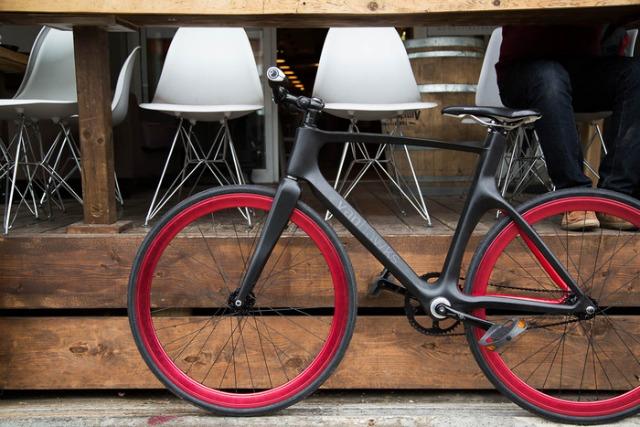 Vanhawks' Valour is a connected commuter bicycle that hopes to make your travels both smarter and safer. The 16-pound carbon fiber bike can help you find a route to the office that avoids heavy traffic, and gives you turn-by-turn bike-specific directions to your destination along with blind spot detection while you're on the road. It's a combination of features that's likely to have you traveling on two wheels a lot more often.

Unlike other solutions that use add-on computers, information you get from Valour comes through its handlebars. In the case of directions, the bike communicates with your smartphone using Bluetooth LE and lights up small LEDs at the center of the bars when it's time to turn. Rather than just regurgitate Google Maps, the bike determines the "best" route for you through its app based on its own experience with your commute and other Valour owner's travels. For instance, if you hit a pothole on your way to the office several times, it might start suggesting you take a detour around it rather than risk an early-morning faceplant. Likewise, if several riders find a road closure at 6AM, the bike will make sure you're on time for work by guiding you around the issue at 8AM. When you're checking out the sights on your new route and get a little too close to traffic, the handlebars will even vibrate to let you know there's something in your blind spot.

The high-tech bicycle is currently raising money on Kickstarter for its first production run, with units going for around $1000. After 15 days of being live, the project has already raised more than four times its original goal. The extra cash means that Vanhawks is now offering the bike in several different frame and rim colors, and units will also include Avid BB5 road disc brakes and a Cardom Gates belt drive. If you want to snag a set of wheels for yourself, you still have 16 days to get in on the Kickstarter. The first shipments of the bike will hit the streets in October.

In this article: bike, commute, connected bike, directions, travel, Vanhawks Valour
All products recommended by Engadget are selected by our editorial team, independent of our parent company. Some of our stories include affiliate links. If you buy something through one of these links, we may earn an affiliate commission.